Last Thursday saw the 2008 Burgundy release tasting at the Tower of London, a venue we are making our “tasting home” for the time being. The format was a pretty tried and trusted one with a press and trade preview from 3pm till 5.30pm and then from 6pm till 8.30pm it was the private customers tasting, with a really good turn out of just under 200 keen tasters. The room was busy all evening without being overcrowded. The wines showed well (it was a “fruit” day after all – that’s to do with biodynamics and for another time all together). I noticed quite a few of the wines having put on a bit of weight since November (wish I could say I hadn’t). This tasting has become very much part of the furniture for us now with people having the chance to tast, as we often do, unfinished wines. One of the exceptions to this were the brilliant wines of young Vincent Dampt which never seem to disappoint. I won’t go on about the specific wines here as that is all covered in the offer Allison has written and in the blog enteries from the trip.

As well as t

he rafts of 2008 we also made an effort to show some older vintages of wines that we have just shipped amongst the whites (pictured) that we showed were some Matrot wines from 2004 & 2006 that arrived last month along with a few Olivier Leflaive’s and the Macon Verze 2007 from Domaines Leflaive. The reds were new arrivals from Varoilles & Arlot. Both tables seemed to go down really well. Arlot and Varoilles both made very good wines in the four star vintage of 2001 which I like very much when we tasted at the Domaines in November and Arlot also showed some wines from the tricky 2004 vintage in which they shone with there finesse orientated style.

It was great to have so many producers on hand to show their wines and our thanks go, in no particular order, to:

The tasting only promises to get bigger and better each year. Next stop the very exciting 2009 launch next January. 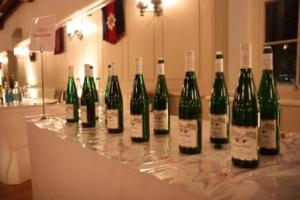 allocation of the immaculate JJ Prum wines. These are hard to taste in their youth as they are reductive (sulphurous) on the nose, this can to a degree be conquered at this early stage by double decanting which we did in the morning of the tasting. The nose takes 3-4years to fully settle but the palate is stunning from the off. The Wehlener Sonnenuhr wines were particularly superb….to be released for sale soon!! For those who still hadn’t fallen to palate fatigue the Trapet wines form Alsace where there to be tasted too.

The Beefeater on duty promptly cleared the room as everyone has to be out of the tower by 9.30 for the Ceremony of the Keys (the Longest continuously running Ceremony of its type in the world I’m informed). A few of us stayed behind to help clear up, once the job was done we were delighted to find a substantial chunk of Taleggio which we washed down with some opened samples! Then it was upto our Jewry Street Winebar for a drink and some food with the producers….. a long but massively worthwhile day….