I had been looking forward to yeaterday’s lunch for weeks. The kind invite to Fran (Mrs H), Charlie (Hargrove Junior) and I from Eric Sabourin and Family had been made back before Christmas. Other guests were Jon (works with Eric) and Sam owner of my favourite current restaurant – Zucca http://www.zuccalondon.com/. As a lover of all things Piedmont and that being Eric’s speciality I was understandably excited.

So, once we had the compulsory Campari and soda (I always think this is Italy’s G&T alternative). We were on to a bottle of Brut Initial from Selosse, until about 2 months ago (with Eric at Sam’s restaurant weirdly) I was a Selosse virgin. I now love the wines, expensive though they are. This was, as you would expect, toasty and rich but with poise and definition, a really great start, it was still good at the end of the meal as there was some still in the bottle! Makes me realise I love the two extremes of Champagne; Salon and Selosse – couldn’t be more different but are wonderful. From the Champagne we went on to have Thai Prawn salad with 3 different 2007 Spatlese from Prum, a producer I know quite well and admire. 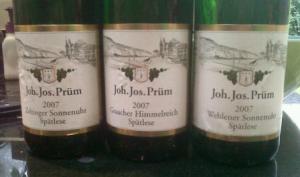 These were spot on despite having decades of life ahead of them, it’s been said before but is there better value anywhere? I found the Zeltinger Sonnenuhr the most intense and the Wehlener Sonnenuhr the most elegant and refined, they were all delicious. It did further cement my opinion that I love the germans up to Spatlese level, I am less inclined as the sweetness increases, wonderful though they are I do not buy them for myself. There was no typical Prum stink either on these – they can be quite reductive.

Next up was a tasting precusor to the mature reds. For some time Eric and I had been trying to get together to taste the Francesco Rinaldi 2006’s. On trust I have bought them already (as Sam had). They did not disappoint in any way. Cannubi was up first, being repurted to be more aromatic, this was definitely the case, a very revealing nose, with openess and elegance, very classical on the palate and with ages to go but pretty too. Brunate followed and played up to stereotype, tighter more brooding and masculine, harder on the palate but very good, a keeper. I am chuffed with both as purchases. I kept re-tasting through the afternoon and the quality is there in spades. The 2006’s I have tasted are very much to my liking I am pleased to have bought several. So with the tastings done and conversation flowing we were onto the wines for drinking. First up was Spanna 1964 from Vallana, spice, good strong colour to the rim and very much a Nebbiolo nose, it was still very Piedmont and very Italian. I am always releaved when bottles like this are good and haven’t just become “old wine”. A real treat, very retro bottle/label was a laugh too. Barolo Cannubi 1990 from R Voerzio was next, being a lover of the 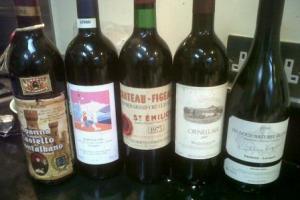 very traditional style of Barolo I am not that well versed in Voerzio’s wines. There was a strong hint of marzipan on the nose initially that then dispersed, the texture more than anything gave away the “new skool” maker. The balance was good and the wine is very polished but still with structure. I am note sure it’ll improve but it is definitely holding very well. A good, good wine. Ornellaia 1988 was next as we moved to Tuscany, this was Sam’s bottle and had a closed nose at first but that opened up well, it was delicious, with decent structure and classical with a savoury quality to my mind. There was good fruit too though. Sadly the middle bottle in the picture Figeac which Eric had very kindly

wanted to open as it was both Sam’s and my birth year, 1975 (and yes I’ve had a hard life!), was corked and not even in a way that meant you could theoretically assess the wine, this was “fully” corked…a very kind gesture that did not deserve such an ending. So the Tuscan adventure continued with the Figeac being replaced by a tip top bottle of Pergole Torte 1990 from Montevertine – showing great fruit balance and still with structure to come, very youthful and a great bottle. We had eaten through the great Lamb by now and were on to cheese, which as usual I ate far too much of. Eric was just about to open some sweeties when we rememebred the bottle I had bought – Rasteau VDN 2007, Tardieu Laurent – which was spot on with a rich chocolate and pear tart. Needs a few years for tannins to soften but it is a nice drink now. I was not sure what to take and have found that something for the end of the meal never gets in the way!

Many thanks Eric and Clan for an awesome day!