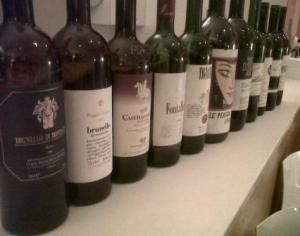 My knowledge of Tuscan 1988’s is very limited so the tasting laid on last night was a brilliant chance to learn and assess the wines. Set up perfectly as ever by Mr Sabourin we started with a glass or two of Louis Roederer NV which I have to say was on great form. Then we were down to “work”. The tasting was organised into three sections – 1)Brunello’s, 2)Sangiovese based Super Tuscans and 3)Cabernet based Super Tuscans with each section having 2 pairs in it. This set up was stated at the beginning but the wines then served blind. All wine has been decanted out of the bottle and back in. Everyone scored out of 100 so I have done the same.

Poggio Antico – Fuller darker colour than the Cicacci. A nose with some mushroom notes as the wine opened up. Quite masculine and a little four square. Good if a touch hollow. (Note: this was opened as a replacement for a corked bottle so had no “air time”) Drink now. 89+pts
Soldera Intesti – Corked. Everyone was gutted about this understandably.
Castello di Ama Vigna Apparita – Deep and impressive colour. Richly brooding red and black fruits. A lot of sweetness and ripeness. Quite international, impressive. Drink now-2019. 91+pts

Fontalloro – Deep core to a brick red rim, rich maturity to a Bovril edge, balanced and despite a dash of dryness recovers to finish well. Drink now-2012. 92-93+
Tignanello – Nose similar to Fontalloro but showing a touch more age. Fruit a little battered and bruised but in a good way, plate a touch to simple (not as good as the 2001 tasted recently). Drink now-2012. 89pts
Pergole Torte (from mag) – Slightly cloudy appearance suggested not the greatest bottle, a touch too dry on the finish, not bad but those that know suggested not a true example. Drink up. 88pts
Flaccionello – Very Italian and slightly rustic nose, bruised fruit and a dash of highness, it is a bit tired but I like it. Drink up. 89-90pts

Summary: A good vintage, as the scores suggest the wines were very consistent. The wines were all certainly drinking but many going strongly. One small note and possibly something that should be taken into account is that these are all very much food wines, especially in the case of the first two sections.