Skip to content
Date: June 10, 2011Author: 194kpr 0 Comments
Last Thursday saw the return fixture from the http://duvaultblochet.blogspot.com/2011/01/6-go-wine-mad-in-yorkshirestaring.html tasting dinner and also a chance to celebrate “Sussex’s” 40th. The team assembled at 12.30 at the Connaught and after a, very good, bottle of Pol Roger 1999 Blanc de Blancs we made our way down to the Sommeliers Table. See below new Sussex looking very at home.

The first wine downstairs was Wiltinger Brauner Kupp Auslese 1988 from Egon Muller, the wine was very elegant balanced and a greater starting point. The nose opened up but sadly by that point I had greedily finished mine. Blind I wouldn’t have said Auslese as the wines had developed and left that level of sweetness behind.

Once seated we had the first of 4 wines from 1971 – Dom Perignon Oenotheque 1971 – served decanted so as to be blind. I loved the mushroom-like nose but the palate didn’t quite match. A great wine to have tried and a good match for the charcuterie. It would be very interesting to know how the non Oenotheque bottling is by comparison.

Next up, with Foie Gras, was a real highlight, Yquem 1971 (picture below) in immaculate condition, long, fresh but also developed and at a lovely stage, just how I love Sauternes…wow.

With a pea and salt cod dish we next had two wines totally blind from the Sommelier Clos de Litanie 1971, Pomerol & Chateau Cabrieres 1971, Chateauneuf-du-Pape – The Pomerol I got wrong and though was more Pessac in style but I’ll forgive myself that (nobody else did)…the Chateauneuf was a weirdly “bovrilled”, semi madeirised wine, a bit past it despite probably being as good as it’ll show. Nice to have some more 1971’s we had 5 in total as there is still one to come.

dish of the day – Calamari Ravioli. The wines were Bienvenues Batard Montrachet 1999, Domaine Leflaive & Meursault Les Rougeots 2000, Coche Dury they were served – I believe – in that order which was the opposite to what the sommelier said but having had the Bienvenues 1999 just before Christmas with the same crowd I feel sure I am right (and was kindly supported by others)…anyway both were splendid and showed how good those producers are. Neither has peaked just yet which is good.

And now to Bordeaux with the tandoori spiced scottish scallop, two wines I have always wanted to taste as they are great wines and rather glaring omissions from my “repertoire” – Margaux 1983 & Palmer 1961 – As they were served blind and we had taken some other Bordeaux the 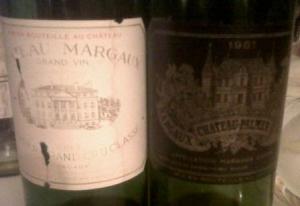 consensus was that they were younger, never a bad sign, the cool temperature having something to do with this. The Margaux was an elegant and balanced glass, mature but in no way past a peak, real balance and without being greedy the sort of wine you want a bottle of rather than a glass. The Palmer was exceptional, in at least three ways – pure quality (amazing), the bottle itself (a great one) and it’s “differentness” (it is a bit of a freak) – it seems insane but you could decant that wine for 2-3 hours and I can’t see it fading. The last mouthful was the best Given that the vinification back then will not have been complicated it makes you wonder I there is too much top Bordeaux being “made” today. 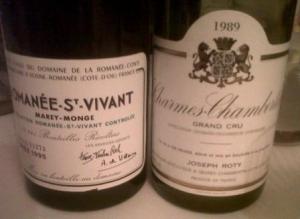 aving drunk “enough” great producers to last most months already the heat stayed on…up next with Roasted veal was Romanee St Vivant 1995, Domaine de La Romanee-Conti and Charmes Chambertin Tres Vielles Vignes 1989, J.Roty. Both wines were interesting but only one was great. The RSV was a really lovely wine that a few of us had had before Christmas, elegant, balanced and fresh with lovely red fruits, it is fair to say it was still primarily primary in character – very impressive and with a way to go. The Charmes was frankly a disappointment, a little soupy and whilst I expected it to be more masculine than the RSV I think that would be a kind way of putting it. A little too rustic and lacking the required charm. Having had the 1988 of the same wine I think it was a phase when there was a little bit too much oak and extraction – nothing like the wines they now produce. 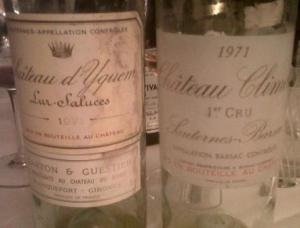 Next was Climens 1971 which I thought was a delight and shows there is some exceptional value in good and great Sauternes (and whilst you now don’t think of “Yquem” and “value” in the same sentence I do include older Yquem in that). It was a great wine and a good decision of the sommelier to serve the two 1971 Sauternes apart as we could enjoy both without a competition. Very special and both great both bottles, obviously well stored. These gatherings always seem to feature at least three Sauternes (lets face it we never drink enough Sauternes!) and so it did again as de Fargues 2001 was now served, a pick from the wine list. It was served blind to all but two of us and I have to say I thought the suggestions were entirely logical if not correct – suggestions were mainly that it was Rieussec and anything from 1989 to 2001. I could totally see why, it had a real Rieussec orange peel richness about it. A very interesting ending to the main wines.

With a some more time before the Northern contingent had to get trains we had one more Dom Perignon Oentheque this time the 1995. I liked this, although my palate was a little jaded by this stage. I think 1995 Champagne will always suffer from being next to the ultra classical and superb 1996’s. The 1995’s are a lovely drink, softer and suppler with a lots of balance. In time they may be a good value, if different, alternative to the 1990’s & 1996’s. 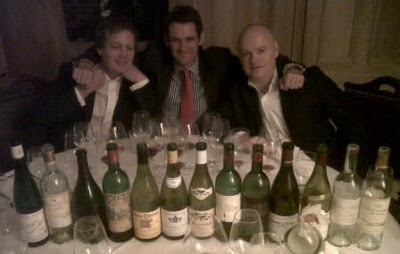 It was then upstairs to the bar for a slightly underwhelming Jacquesson 1990 Magnum. Nothing wrong with it but I didn’t think the complexity you would want from that great vintage. It did show that the glass matters as the glasses were designed to match the bar not the wine…a small but relevent point.

Henley made a very wise shout that it should be “cigar time”, never something I disagree with so I accompanied Henley over the road to Sautters where we purchased seven Sancho Panza Belicosos – a cigar I love. A great way to finish a great day. Special thanks to Henley and Halifax for the organising and to Newcastle for some especially generous wine choices.

Roll on another trip to the North for round three, all we need is a tenuous excuse!!