On Saturday just gone Charlie and I made his first Pilgrimage to the home of Jump racing – Cheltenham. This was his 4th days racing having been to Leicester, Newbury and Goodwood before. He has an interest through the fact I love the horses and a bet. We set of early to avoid the traffic and stopped off en route for breakfast and a quick first look at the Racing post, got to have a copy each!!

Just over a year ago we went, as a family, to Newbury and Charlie has ever since had Big Bucks as his favourite horse so he was delighted to see in print that he was running again. I had been keeping a close eye on this in the week before as it would be a great for Charlie to see him again.

With breakfast done and a good early arrival secured we had a good wander around before getting to the paddock for the first…we both liked the look of a few especially Hollow tree for Charlie but certainly thought that Pearl Swan was on his toes and too excitable. How wrong we were as Pearl swan picked up late on to be first past the post, he lost the race in the stewards room however. From then on we followed the tried and tested route of paddock, betting ring and back again. We found a friendly bookmaker who didn’t mind Charlie perching on the rail to get a good view. 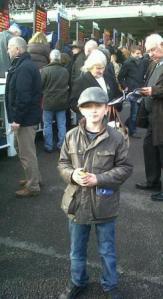 The next three races came and went with Charlie getting in the frame each time but none of the bets were each way. We then needed a winner…Batonnier at 12/1 in the 5th was just the job as we both backed him and that put as nicely ahead!! We were now full of the joys and ready to cheer on Big Bucks. He looked awesome as always in the parade ring, very imposing, he even got a round of applause pre race. With the winner in the bag I could justify a cigar with a pint of the black stuff so out came the Por Larranaga Robusto (Asia Pacific Release 2007) it was good but if anything a little one dimensional. We then moved through for the Cleeve hurdle with Charlie getting on to his usual perch. We both had a little on Restless Harry “without Big Bucks” but that looked a lost bet turning for home. Charlie had convinced me to put £5 on BB for him at 1/5 he was happy with his £6 (I didn’t have the heart to tell him he’d scammed me, may be he knew!) when BB rallied 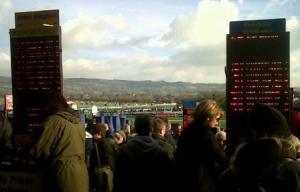 well when looking like there might be a real battle, to win by 7 lengths. We rushed back over to the winners enclosure to see the reception he got and were not disappointed!!
It had been a cracking day and I was delighted that it was just about profitable too…where to next?