Yesterday I was lucky enough to be asked by a friend, Mr T,  who happens to be in the wine trade but also have a child at the school my wife is head of (bit convoluted I know) to a lunch he was throwing for his French Brotherhood. So it was me and eight french chaps. This was doubly good as they all love food and wine but also they spoke almost exclusively in French…something I need to improve and fast. We all met in rainy north London at 12.30 and first up was a tasting of 8 red Buzet and 2 white Buzet. The reason for this tasting was that Mr T had some samples of the wines to look at as a possible listing for him. We didn’t come to any massive conclusion, there were some nice wines without being really earthy or simply typically “Buzet” enough.
Prince d’Albret 2004 –Simple, rustic, soft (I did explain the the name was potentially problematic!!) – 13

Chateau de Bougigues 2010 – Darker and richer than some but a little simple – 14
Les Vigneronnes de Buzet 2009 – Structured and more “Buzet” in style, one of the better ones – 15
L’Excellence 2010 – Lush and fruited, nice but not Buzet, irritating name too – 14/15
Les Vigneronnes de Buzet Merlot / Cabernet 2009 – simple and not one of the better examples – 13/14
Domaine de Brazalem 2009 –  A little bit of make up in the form of oak but it had guts in a true Buzet fashion, good with food, the best, to my mind that is – 16
Chateau de Gueyze 2009 – Too worked and extracted, a shame as the fruit was decent – 13
Baron d’Ardeuil 2002 – The cork fell apart so this was decanted, the age had made it mature but less interesting at the same time, ok and a good glass- 15
L’Excellence Blanc 2011 – Really neutral which is neither a good nor bad thing, Semillon / Sauvignon Blanc blend – 13/14
Baron d’Ardeuil Blanc 2011 – Good fruit but too much oak which was a shame, the same blend as the above, 50% more expensive though due to the swanky bottle and more oak (a common error) – 13/14
Lunch followed at which we carried on tasting the wines above but also those below. 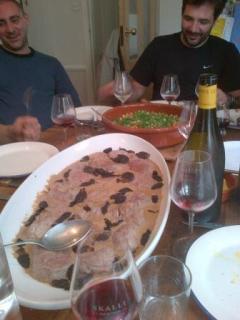 Psi 2009, Ribera de Duero, Peter Sisseck – Served at a tasting the night before so I took it along to show the guys, really lovely and open, getting better every month this wine.
Macon Verze 2009 – One bottle was open and half drunk from tasting the night before the other was opened fresh, both showed well. Lovely easy and delicately oaked chardonnay, reliable.
Chaueauneuf du Pape 2008, can’t remember the producer, sorry. This was a poor 2008. Ok the vintage is not great but some are charming and elegant this was disjointed and a little spirit. In it’s defence it had travelled from the Rhone the day before.
Clos Venturi 2010, Corsica – 100% Vermentino and very enjoyable, fresh, white fruit, like Lynchees without the sweetness. My first Corsican.
Nelson’s Estate Late Harvest Semillon 2010 – went really well with the Foie Gras, it is rich but retains acidity as a ready to go “sweet” this works well, no point keeping it further.

The food was excellent, as you would expect, lovely bread amazing rillet’s, Foie Gras to die for and then some of the best veal I have had in ages, cooked with a Morels sauce. The cheese was also superb, even the goat’s cheese and I don’t really “do” Goat. The chat was great; food, wine, rugby it was a very special afternoon and one I was delighted to be at. I even think my French improved a little.

Once I got home and caught up the emails it was time for a smoke under some shelter at the end of the garden. I wanted something quickish and not over powering. I guessed that a Punch Petit Corona would fit the bill, I had bought it in Barcelona. It was a delightful, soft, elegant, balanced, a “white wine” cigar that was just the job. I think I may pick up a box of these as nice balanced daytime smokes. If a total beginner to cigars asked me to recommend a marque I would be tempted to point them to Punch for the moment.