Last friday was a great day, the title of this post kind of gives it away. Golf at Wimbledon Park (right opposite the tennis) was a delight, I’ve played there a few times with our host and organiser for the day Eric. It is his home course and after a round of variable standard golf, mixed with the odd Carlsberg we were a little weary but very happy to have some Bulmers (apple for most, pear for Burnsie) and Youngs Bitter on the veranda. The course is one of Londons gems, 2 minutes walk from a tube and it feels like you are out of “the big smoke”. Having decanted ourselves, do you like what I’ve done there?, into two cars we headed back to base (Eric’s house) for a BBQ, much wine and Poker. Mr Burns settled us all down with some well mixed Pimms before the “serious” business started. 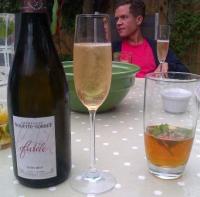 So, first up on the wine front were a couple of bottles of Vouette et Sorbee Cuvee Fidele Extra Brut NV, this is 100% Pinot Noir and not a wine or even producer I have had before, it has a richness but not too much toast, as close to a rich Rose as a champagne that isn’t a rose can go if that makes any sense, I really enjoyed it.

The next three were a real treat, wherever you are and whoever you are with top prums are always a good idea, this was a trio of Wehlener Sonnenuhr Auslese Goldkap 1995, 1996 & 1997. The 1995 was a little closed, but nicely so, lovely texture and just the sort of thing that wakes up any tastebuds. The 1996 was the most complete of the trio having a little (in fact tiny) amount of development the delicious texture of the 1995 but more in the way of expressive fruit. The 1997 then tasted certainly the youngest. Almost a sherbet and citrus like spritz, a classic trio for which we had our host to thank. These went down a treat with some ham, great bread and then beef skirt in a bit of chilly that was served wrapped in lettuce leaves with some dipping sauce, an awesome “start” to proceedings.

The next wine course was another triple whammy this time of Red Burgundy mags – Savigny els Beaune 1er Cru Les Marconnets 2002 from S.Bize, Volnay 1er Cru Caillerets 1999 by N.Potel & Mazis Chambertin 2002 from Dominic Laurent. The Savigny was ready, refreshing and pretty. The Volnay was elegant with a vibrancy and moreish quality that I liked very much. The Mazis possibly suffered from “preconception syndrome” as Dominic Laurent has a reputation for masses of oak. This was a richer meaty and slightly more gamey expression but in fairness 2002’s are like that. It has a richness that comes from the Grand Cru scenario, compared to the other two red burgs I would say, unsurprisingly, that it would repay some time the most. There were then two more food courses, both ribs and both superb, I am well out of my comfort zone here but the (very thick!!) beef ribs has been in a water bath for 4 days and all I can say is that it works!! 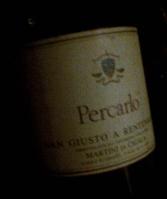 As poker was starting it was time for a couple more mags namely – Grand Puy Lacoste 1990 & Sassicaia 1987 – the former was deliciously balanced, perfect now, classic Pauillac, all those classic notes, black fruit, cigar box etc a joy. The Sassicaia on the other hand started nicely I thought, a little green but good green but half way though a glass it showed it was definitely corked. That sounds silly but it didn’t show initially but as it opened out it clearly was more that just musty. Our ever ready host had just the thing ready in the form of a magnum of Percarlo 1988. Really enjoyable, I was well beyond making notes, mental or otherwise but remember really enjoying it, further reassurance that 1988 tuscany is great stuff. On the tuscan theme Ornellaia 1987 in magnum was next followed by a bottle of Tignanello 1986. The former I don’t think I tried, the later was the most developed wine of the night almost aged-Barolo like in having a bacon like aroma, certainly in one piece but at it’s peak. One of my contributions was next Psi 2009 from Peter Sisseck, a wine that showed well albeit a change of pace, class and age from its predecessors.

One reason I took it was that being Tempranillo it goes well with a cigar. On the cigar front we were very well looked after with boxes of three different Cubans to choose from: Hoyo de Monterrey Short Robustos (May 2007), Hoyo de Monterrey Epicure Number 2 (2002) & La Gloria Cubana Tainos (2001). I went with the last of these as I know the other two well, albeit not with that age on them. The LGC Tainos (a size just thinner than a churchill) was superb, integrated, balanced with good spice but not too much, great stuff. Whilst all this drinking was going on we were in the middle of 4 hours of Poker, all Texas Hold’em. There was good banter and having a dealer and table delivered was yet more wise judgement from the host. Mr Buchanan got a lead early in the main game and sat there, quite rightly, making people pay to see his cards…a cracking game it was too. As poker came to an end and everyone moved out to the garden for cigars and cheese there were a couple of Germans doing the rounds – 1991 Graacher Himmelreich Spatlese & 1985 Erdener Pralat Auslese – I only had the later which I can report I enjoyed but can’t comment much further other that to say it had a great retro label that sadly my phone did not want to photograph. Also doing the rounds was a tip top bottle of Grahams 66. Delicious it was too. All I can really say is “what a day”!!