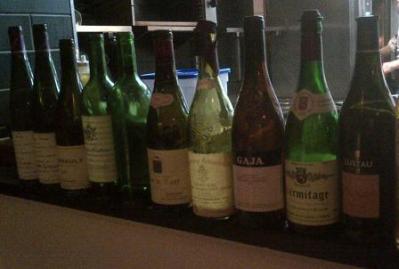 Following from the first meeting of what I can see is fast becoming a regular dinner “gang” at Zucca in January here for the post we met last Wednesday at Trinity in Clapham.
I don’t really do food and or restaurant reviews (I tend to eat out at Zucca) but I have to say that why Trinity does not have a star I do not know. The dishes were all delicious and clever without being fiddly. The menu and pictures are at the bottom, they do corkage too but I am sure also have a good list. Recommended.

So the wines, there was no theme as you’ll see but actually the balance of wines worked really well. We started with two vintages of Bianco Seco from G.Quintarelli. A wine made predominantly from Garganega (as in Soave) but also some other “bits n bobs” amongst them Sauvignon Blanc and Soarin which is near to Furmint apparently. The 2011 and 2007 were the two vintages. The 2011 was Floral but with a nice waxy texture, young and quite taut but very balanced. The 2007 was in a similar weight profile but was a little more oxidative and more unctuous, I don’t know if this wine has phases but I would say the 2007 is probably a dash better than this showing or may be could have been a touch cooler. Fascinating wines and a good start. Next up was a bit of a gem Meursault 2007 from P.Boisson, as in Boisson of Boisson Vadot a producer getting rave reviews and the beginnings of a cult following. This was way above village Meursault in ranking, refined and yet with broad chest and shoulders, as yet unpuffed, a lovely touch of reduction and struck match. Serious stuff indeed and another strong showing from a very proper white Burgundy vintage. I am definitely finding, in agreement with the provider of this bottle, the 2004, 2007 and 2010 vintages the place to go for white Burgundy and none with the exception of 2010 get the uniformly rave reviews they might. From here we were onto a pair of Bordeaux, the first of which was blind – Lafite 1970 – from a bottle with no label remaining. We had a bit of fun “guessing” I went for mid 60’s Pauillac which was actually more of a hedge that a specific guess as it was never going to be too far away. With a few steers we got there in the end. Encouragingly the wine got better and better with air, it was developed but had good, once black, fruit and tasted less than its 43 years. A real treat. My offering a kind gift from a friend was next – Montrose 1966 – it was a few wines in one. The level was good – at the junction – the colour was a firm and saturated colour, richer and darker than the Lafite. The initial nose was strange but on one swirl in the glass it released a deep beef stock and soy nose with good fruit, there was also a touch of bacon fat and a little caramel before a brief finish. It was strange but fascinating. It also got better with time. A really good pairing.

Burgundy got its chance next – Clos de Tart 2001 – this is a wine I have been impressed with a few times. Sylvain Pitiot took over the helm at the domaine midway through the 1996 vintage and the wines improved from there but I would say that from the 2001 you really see the rewards of the work that was put in. I also love this vintage for reds. It is still in its almost primary phase, there is both freshness and depth which is both encouraging and impressive. The fruit is brambly with some candied cherry elements. So much fruit on the nose, the palate a little more muted, if you own this wine, you are lucky but also I would say keep being patient. Next on parade was Beaucastel 1981 a wine that it appears is a bit of an insiders secret, not a secret I knew about! There was depth and texture with soft black but hard to define fruit and a bit of good greenness. Too many wines now are so afraid of greenness that the over selection that goes on is crazy. This Beaucastel clearly had both young and old vines and was all the better for it, really delicious, mature but not in old age. The next wine was a stunner – Sori San Lorenzo 1989 from Gaja – my notes are a bit strange though as they simply say…”Ski boots” “adolescent” & “very good”. The former is a note I have never written before and must be to do with only coming back from Skiing a week ago! This wine was delightful but in mid-development at best and backs up a good Sori San Lorenzo 2001 tasted here.  The last red was Hermitage 1989 from Chave, I am very poorly drunk in the Rhone which needs work, what can you do? This showed as a big wine, very dense black fruit, it was served a little warm which was a shame, the structure was well integrated and I liked it but even more than the Gaja it was still very young. Must drink more Chave. We had a corked bottle of Sauternes so we went for a Pedro Ximenez San Emilio from Lustau with a rather spectacular desert as below. It’s a good wine and works so well with the richer darker puddings. A cracking evening, apparently Medlar is next…can’t wait!