I am delighted to say that something of a tradition appears to be emerging…a November truffle extravaganza at Zucca.
Sam (Harris) organises a great menu, Eric gets a fun crowd along and we all bring wine then eat our way through about nine courses each coated in white truffle. The 2013 Truffle crop would appear to be stunning. The best bit of it all is that people are generous and choose interesting bottles, about half way through you can’t work out whether its about the wine or the food – perfect!
As always we kicked off with Perle 2006 from Ferrari, showing well at the moment with a little edge of lemon shortcake then a dry finish it sets things up well.

So, with some Sprat Fritti and Broccoli Fritti it was time of the first white, my white. Meursault Perrieres 2009, Matrot in Magnum, it’s my wine so I can say what I like, I took it because I have a lot of time for Thierry Matrot and think that he makes some seriously good wines. This, however, was decent but no more than that, ready now, a little broad and loose, not worth cellaring further. The next white was very poised Chablis Grand Cru Valmur 2003 from Raveneau you would not have guessed 2003 in a “million years”. Chablis purity and a lovely whiff of old gym socks that you some times also get with White Bordeaux, beautiful texture and very expressive but in no way “of” a hot vintage, very moreish and a perfect combination with the delicious triple header of Pesce Crudo (see pic at bottom).
And so to the red as the Venison Carpaccio smothered in Truffle hit the table, the dishes were all good but this might have been in the top three for me. The red of choice was spot on, lots of black and a little red fruit exploded out the glass, charm with a dollop of extrovert, it was La Dame de Montrose 1990, two bottles served separately. The structure was soft and I would say this was definitely at a beautiful peak now, really great. It is so nice to be excited by a Bordeaux.

The next five reds were all from magnum and were all decanted as the “Dame” had been. We ventured into Burgundy next with Romanee-Saint-Vivant 2000 from R.Arnoux. Open, mellow and fruited without a bite of structure. The 2000’s are looking lovely now and certainly it represents one of the vintages to be drinking. A totally new dish to me was served with the RSV –Potato & Mushroom cake, fonduta, Saturday breakfast was being cancelled as I started it and that was only the last of the Antipasti!
The structure of the wines took a bit of a step up from here with Ornellaia 2000 showing next. It showed superbly, ripe and a touch sweet with a dash of tobacco. It was expressive and stopped short of being too much, may be a little tarty but in a good way, just lovely from now onwards. The dish with it was what Sam described as an “old school” pasta dish – Ox cheek Cannelloni, Cauliflower Cheese – slow cooked comfort food with Truffle everywhere? Yes please!

The next wine was the only glass I didn’t finish – Voerzio Barbera d’alba Riserva Pozzo dell ‘ Annuziata 2007 – it had been decanted at 4pm and was still almost impenetrably rich and port like. I have not had it before and it’ll probably out live me. It would also stand up to chocolate very well. If you own it then forget about it for a decade I’d say, incredible stuff that was just hard to gauge in amongst wines with a different texture and weight. 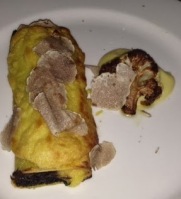 Risotto Bianco came next and once the “truffle squad” had been you actually couldn’t see the Risotto, apparently Adam who did the food with Megan helping as well, doesn’t like doing Risotto, well all I can say it that it’s pretty awesome. It worked really well with the next magnum, Barolo Brunate 1997 from Marcarini, this is a wine and vineyard I know well but I hadn’t had the 1997 before. It can be a tricky vintage as it is often a little open, lush and lacking focus but this wasn’t. As “Henry the 8th” my fellow diner said “the cool serving temperature was crucial” to how well this wine showed. Warmer vintages need cooler temperatures. The wine showed tarry red fruit and a little tartness (in a good way). Really very enjoyable.
Pigeon, Hare & Lentils was the next course served and may be it’s the fact that I live in North London but I love lentils especially in this sort of dish. It was a prefect foil for one of, if not the, wine of the night – Barolo Brunate Riserva 1988 from Giuseppe Rinaldi. Rinaldi is a wizard of a producer and one whose wines I do anything to buy. My notes are hard to read by this stage but I can tell from their erratic nature that the wine was exciting and exacting. Lots of fruit but a lovely degraded complexity, dense and rich but also elegant and with a cracking saline quality that I love in the best Barolo. Simply put, a brilliant wine. 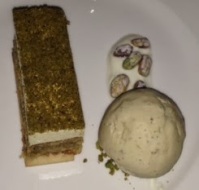 The main course (yes that’s right the rest was just a warm up) of Grouse, Roast Carrot & Wild Mushrooms was now served and along side it the oldest wine of the night. Another legend of Barolo – Cappelano. The wine was Barolo 1964 from 2 different bottles. The wine had a nutty, hazelnuts and walnuts, finish as well as some sweet but degraded red fruit, lovely but I would suggest it has little more to offer from here on in, the savoury bacon and tar edge was delicious, the odd “frazzle” too but not too many.

A fascinating blind white was served with the selection of Italian cheeses, it was a couple of bottles of Clos Joliette 1970, Jurancon Sec. It was like dry toffee apple and one of those wines that was fascinating on the nose but slightly harder work on the palate, really intriguing. And so to a lovely Pistaccio Cake with a cracking couple of halves of Avignonesi Vin Santo 1986. The Vin Santo was brilliant and even at the end of this feast of wines and food it caught the attention for having a beautiful rancio edge to a lovely nutty but fruity nose…as good a Vin Santo as I have ever had.

Staggeringly good evening as it goes – thanks to all for their generous bottles.