Skip to content
Date: November 2, 2014Author: 194kpr 3 Comments
This was an a unique opportunity, set up by the hard work of Jordi Orriols-Gil to taste so many different vintages of the Clos des Ducs a 1er Cru monopole belonging to Marquis d’Angerville. It was wonderful to have Guillaume d’Angerville there. Guillaume is the 6th generation of the family to head the estate that by common consent is the pacesetter in Volnay. The Clos des Ducs itself is a 2.15 hectare site (Volnay 1er Cru is 110 hectares as a whole) and has a unique exposure in Volnay being the most northerly of the vineyards and facing East-South-East.
The dinner was held at La Trompette in Chiswick, the service and food really worked well. We started with Bollinger Grande Annee 1982 from Magnum – A little spritz on the attack then the wine gets quite mellow pretty quickly. Some toffee and richness, dry but nutty, quite a foody Champagne, very much Pinot based. Good.
Flight 1
Pot roast pheasant , root vegetables and chestnuts – A beautifully clean dish with just the right about of flavour, reminded me how much I love chestnuts in things.
2002 – A dash of cheesecloth, very red cherried purity, some lovely minerality to the palate, showing very well if dense and taut. Serious wine with really lovely balance. If you own it you’ll be best off being patient and excited! 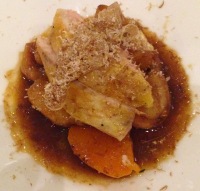 2000 – A little darker in the fruit character than the 2002, with a little spice and black pepper, very typical of 2000 red burgundy in being balanced, easy and really quite accessible, there is a warmth. Nothing like the seriousness of the 2002 but a lovely bottle.
1999 – The last wine of the first flight. I often, almost always, prefer the 1999’s to the 2002’s. This had a very vibrant red fruit core with a little grip to the finish, serious for a 1999 when often they show less structure. Possibly not quite the potential of the 2002 but nicely different and very good.
Flight 2
Hand rolled macaroni with Vacherin mont d’or, ceps and burgundy truffle – A rich dish with flavours that complimented the age development the wines are starting to show.
1996 – Richness here and density but as with many 1996’s is there charm? I think the room was divided, I like the strictness of the wine but I think it is something of an acquired taste, may be my Nebbiolo obsession helps here. There is a nervous intensity, if it were a person it would be an academic.
1995 – This was a surprise package, balanced and approachable, really lovely actually, just easy to enjoy, there is structure but it has started to mellow.

1991 – This bottle had a little seepage and on tasting sadly it showed, not fair to comment really as there had been definite oxidation. Other reports on the wine from those who have tasted recently were glowing so a shame.
1990 – Deep colour and rich texture, the most savoury yet. I could see the 2002 developing this way. There is power but also hedonistic opulence, very impressive and very true to the vintage.
1993 – This was a late addition and a splendid one. I had the Taillepieds 1993 recently and really enjoyed it. This had a similarly, al be it more concentrated, feel to it, red currant fruit and crunchy freshness, really lovely right now, almost crisp which is amazing for a wine of 21 years old.
Flight 3
Fillet of John Dory with smoked lardo and creamed potato– A fish dish that didn’t really behave like one, delicious use of texture.
1989 – Quite savoury with an opulent texture, hazelnut, chocolate and mocha all appeared on the nose, amazingly different in style. There is fruit but it is secondary, a sexy vintage and a very impressive wine. The 1980 vintage flight as a whole was very strong. 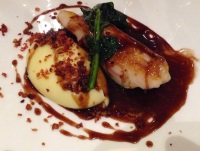 1988 – To my mind this was not a perfect bottle, a dusty slightly metallic nose. With the flight being so good though, I just moved straight on…
1986 – A strange nose initially that reminded me of cucumber water, disappeared with a swirl. Thereafter the wine settled into a secondary aroma of cep and other mushrooms with an undertone of oyster shell, impressive.
1985 – Delicious even given the high expectation, lovely balance of fruit and a savoury sweetness, in a lovely phase right now…a little chestnut shows on the nose…special
1983 – Sweet leather and spice, brown slightly degraded fruit, good volume, very fine. A tricky vintage on the face of it but this really outperformed that…very complete, may be the pick of the flight for me but it had competition from ’89 and ’85 – a lovely problem to have…
Flight 4
Suckling pig belly with golden turnips – lovely dish with great fat that worked well…
1976 no1 – the first of two bottles of 1976, a crazily hot vintage, referred to as a “sauna” vintage by Guillaume (a phrase I plan to “steel”) who commented that Clos des Ducs never suffers hydric stress as there is a natural well in the Clos and when you combine this with there being woods above the site as well there is always a natural retention on moisture. This first of the two 1976’s was a little more subdued than…
1976 no2 – quite opulent and open, lovely now, just enough sweetness, slightly resinous, from all the chat around the table it would appear this has taken a while to open up.
1972 – Cocoa, mocha and a brown fruited nose, some people saw this as over-mature and on the palate I can see their point but on the nose is just very tertiary and a shade madeirised but fascinating, with ones eyes shut you could almost image this was old sauternes. I loved it.
1971 – Instantly good and enjoyable. Sweet and in impeccable condition manages to combine lightness of touch and a persistent brilliance of balance, very pure and with red fruit still there.
Flight 5
Pressed shoulder of Pyrenean lamb with Jerusalem artichokes
We then had 1953 Champans and Clos des Ducs served side by side – we were asked to guess which way around, amazingly it was fairly clear that we had Champans first and then Clos des Ducs.
1953 – Champans – Super, lightness of touch, a little dash of Soy which is just a slight sign of age but a good bottle.
1953 – Clos des Ducs –  Depth, even quite bold, my note says “becoming quite farmyard, delicious”, impressive definition. What struck me here was that the wines from this site age so well but never with a feeling that they needed to be big in youth to age, there is a balance at all times.
1947 – This didn’t quite show as well as expected by some, caramel, quite bold and opulent with decent concentration but it quite quickly started to tire.
1920 – This was served blind and comes with a fascinating story about how Guillaume acquired a “few” bottles of the 1920. The wine showed so well, full of life, the fruit was orange rather than red but that is as expected. The nose had an amazingly fresh aroma of tangerine rind but even the empty glass had a lovely sweetness and life…a truly memorable experience but not a novelty as these old bottle can be.
With some cheese we had the last wine of the evening – Meursault Santenots 1990– this was by far the oldest stage at which Guillaume has tasted his white wine. The nose was unctuous and nutty after a little air, it showed well and worked with the cheese.
And sadly a wonderful evening had to end, I think even those who came with high expectations, always dangerous, left very excited. There were many anecdotes and wonderful comments…exactly what these great evenings are all about! Bravo Guillaume and Bravo Jordi!