Having a quick look at the blog over the year so far I realise quite how privileged I have been terms of tastings and trips in the last few months. However, I also notice that I’ve only really been writing up bigger dinner and events and not really documenting the wines I come across at the many lunches and dinners I am very lucky to enjoy, in a relaxed way, with customers, producers and friends. Many of the former two have become the latter which is one of the real joys of the wine trade. I also have to say that as my memory gets worse I use this blog more and more to remember if I have had certain wines…so a bit of a recent run of meals… 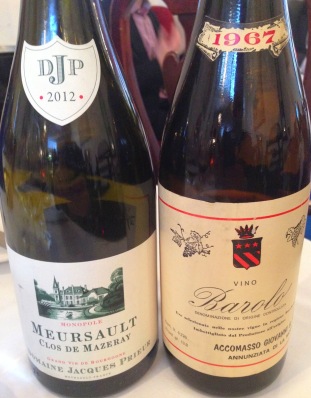 Relaxed luncheon at Otto’s – both the other “Lunchers” had dinners that evening so this was a lovely relaxed lunch with lots of good chat. One white and one red. We started with Meursault Clos de Mazeray 2012 from Domaine Jacques Prieur a Domaine I am getting to know really well. This was lovely and rich but with a saline edge, it’s a good wine from a good vintage. The red, Barolo 1967 from Accomasso Giovani – was rather at the other end of the age range and showed wonderful sweetness and complexity, earth and ash as well as flowers and a shade of red sweet frazzles (if that makes any sense). The food at Otto’s did us proud. A thoroughly enjoyable lunch. 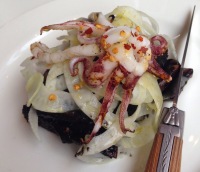 The next lunch, actually the following day, was at Zucca with a mate in the trade who writes, buys and sells. A great new starter has made it onto the menu – Squid Bruschetta with squid ink used in the bread making. It is delicious and strongly recommended. The use of squid and octopus is becoming a real signature for Zucca. The wines we had were a good complimentary pair, Wehlener Sonnenuhr Auslese 2004 from JJ Prum and then Le Vigne de Zamo 2000 by Ronco dei Roseti. Prum is for me one of the most flexible white wine producers with and without food, the variety of sweetness and ripeness and the texture of the wine as well as the lower alcohol really give you lots of options. This Auslese in 2004 has real precision and freshness. The red was a wine I had never had before, it is a Merlot, Cabernet Sauvignon and Cabernet Franc blend, having it blind I was half minded towards Bolgheri as there was a black fruited, bell-pepper note about this but less weight than you tend to get from further south. Friuli is known for whites but on this showing, reds too. 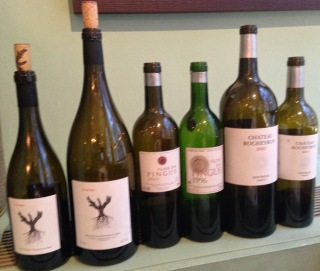 The hat-trick of lunches was notched up with a Friday at 1 Lombard Street near bank in the city, a spot I know well. Peter Sisseck was in town having been at the dinner given to celebrate Alvaro Palacios getting the Decanter Man of the Year award. We had Psi 2010 from bottle followed by Psi 2011 from Magnum, both showed well, possibly the 2011 just edging it for focus. Peter explained how this project worked, essentially protecting old vines by having a co-operative approach to buying their fruit. We then went to the estate that Peter is best know for – Pingus and had the Flor de Pingus 2006 which was showing superbly, yes it is young but it has such brightness that it’s lovely now. To pair the 2006 we also had Flor de Pingus 1996 which I was always under the impression was the first Flor de Pingus, in fact we heard from Peter that there had been a little bit of Flor made in 1995 (the first year of Pingus) but as with the Pingus it ended up in the bottom of the Bay of Biscay when the boat went down. The 1996 has always been a great wine at taking some famous scalps and is fully mature now but still so good. We then just had time, before Peter dashed off to get a plane, for us to try the first two vintages of Chateau Rocheyron 2010 (Magnum) and 2011. The 2010 has a great reputation of course but this is very much a work in progress for Peter and the 2012 are really showing that as is the 2014 I tasted last week in Bordeaux. He will not release 2013 as Rocheyron, instead it will appear only under the second label of Fleur de Rocheyron. 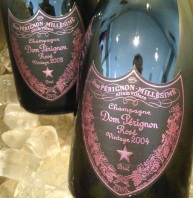 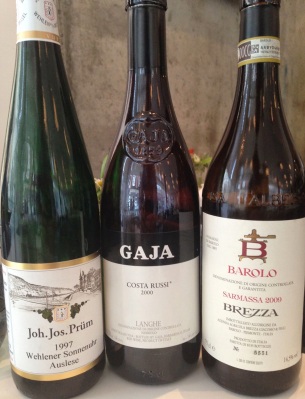 The next lunch was a Friday at Zucca, contrary to popular opinion I rarely “lunch” on a Friday as I like to finish the week off. The visit was the very first for a customer/friend and we had agreed to bring a bottle each – I went down the JJ Prum route again with Wehlener Sonnenuhr Auslese 1997 which showed really well, a little richer and more unctuous than the 2004 but still very fresh and a great accompaniment to the variety of antipasti, or Italian tapas as I like to think of them. It was then time for Costa Russi 2000 from Gaja, this was very Gaja and very 2000, quite bold and full, very good but youthful and may be without the razor sharp acidity you can get in other vintages, the last glass was really singing. As it was a friday and there was still much to discuss I asked for the list and selected Barolo Sarmassa 2009 from Brezza. I like these wines and think they are certainly under-appreciated, think “really good second growth” or a Domaine in Burgundy that makes great wines but doesn’t quite have the Grand Cru holdings it deserves, rich, full but also pure. I am very pleased to own some Brezza wines. 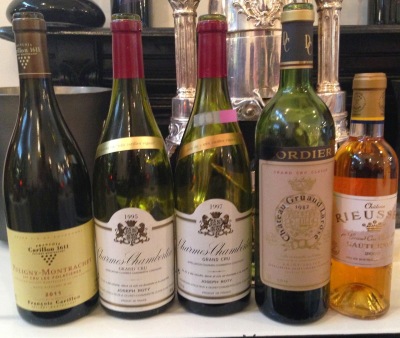 And last but by no means least it was back to Otto’s (yes boring aren’t I). Two customers who used to work together in the city – some great stories – very kindly suggested Lunch and knowing they have lovely cellars I said I’ll bring a white and  pay for the food. So we started with Puligny-Montrachet 1er Cru Folatieres 2011 from Francois Carillon. I really like the Francois Carillon wines, I am biased but think he’s really nailing it with zingy, elegant wines that drink well from early but will age well, he wisely went easy on the new oak in 2011 and the results are lovely. The three reds we had were deliciously different. Gruaud Larose 1982 was fully mature but still rich with dark fruit, a good dose of blood and iron (in a good way of course). The Burgundy pairing was both kind and fascinating
Charmes Chambertin Tres Vielles Vignes 1995 and 1997 from J.Roty. I have always found there to be a masculine style to the wine at Roty but somehow they are never hard, there is a specific texture, a dash chalky. The 1995 was rich, savoury, some soy and sweet stock but then refined and persistent, young but totally appreciable now, good, very good. The 1997 was by a slight contrast open and ready to go, still the same family of flavours – soy, bruised fruit and savoury sweetness but just looser and sweeter, less brooding, lovely now but no rush, medium weight…we then had some cheese and Rieussec 2003 from a half. This was drinking nicely, good balance and a little bit of rancio coming in. I think with the pricing of Rieussec having all gone a bit “wrong” of late that a lot more of it will simply get drunk at lunches and dinners…all in all a good thing.

One thought on “Day to day…”