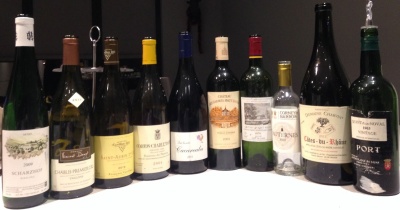 I have come to really enjoy New Year’s Eve. We have the same couple of families around and just eat and drink. There is now the odd girlfriend joining here and there but essentially it is the same each year. We always host which means I can select the wines. One of my quests of recent times is to get more and more people appreciating the variety and quality of many whites. For food Mrs H did two spectacularly large and brilliant potato Dauphinoises to accompany a vat of green beans with three lovely hams, the nibbles and puddings arriving with the guests. 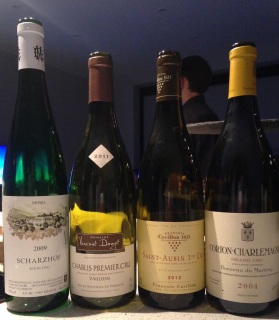 The line-up I chose started with the cool complexity of Scharzhof Riesling 2009, Egon Muller. It was my last bottle of this which was a shame. It has real balance and is off-dry with nice gentle fruit, it seemed to go down well. Chablis 1er Cru Vaillons 2011, Vincent Dampt certainly surprised a few who thought Chablis was a very dry, slightly astringent style. I love Vincent’s wines and buy them a lot, I hadn’t had any of the 2011’s for a while, this 2011 was lovely and balanced, totally open now, as most of them seem to be. We stayed in Burgundy and had the opulent, slightly toasty and showy Saint-Aubin 2012 from Francois Carillon, this from his third vintage on his own. There is an intense ripeness to a lot of the 2012’s I think. The pinnacle of the Burgs was Corton-Charlemagne Grand Cru 2004, Bonneau du Martray – there are really variable bottles of this wine, entirely down to cork supplier. The estate seems to have a cracking record from 2006 onwards and pre 1995 but in between there is a mix. This bottle, I am delighted to say, was electric, so poised and getting better and better with air, a lovely bit of reduction. One final white is a wine I hope I will keep a few bottles of Que Bonito Cacareaba 2011, Benjamin Romeo as it is a fascinating wine, rich, toasted and juicy. Made from a field blend of old vine fruit in Rioja. It changes more than most wines as it warms up and could almost be served as a red wine that happens to be white. 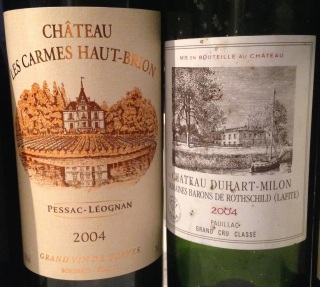 Stu had dropped a bottle of Duhart-Milon 2004 off with us about a month before so I decided we would have it alongside the Les Carmes Haut-Brion 2004, I know the Carmes well and this wasn’t a particularly vibrant bottle of it, a little dull. The Duhart was exactly what you would hope for, some of the iron and savouriness of Pauillac balanced by the ease of the 2004 vintage. A fun pair but the Duhart winning pretty comfortably by a stoppage in the late rounds. Although we moved on to the Sauternes and Port we did dip in and out of the magnum of Cotes du Rhone 2012, Domaine Charvin during the rest of the night and very good it is. I find southern Rhone 2012 to be a little bit of a gem. People don’t seem to speak about it but I think it is pretty serious. 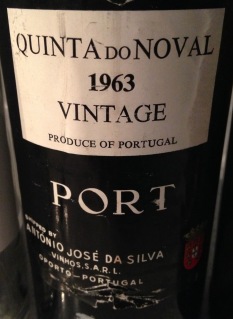 The Corney & Barrow Sauternes 2010 from a half was delicious, opulent, not overly complex but this and the other half I had over Christmas were both lovely. In many ways the wine I had been most looking forward to was the Noval 1963. A gift from a kind customer and friend. It was interesting as well as just lovely in quality. Really quite light in colour, think aged tawny, when poured through muslin as the cork disintegrated. The wine grew in depth and structure with air which I’ve not come across. It was always fruited with delicate sweetness and just a joy to drink. I’ve had a few bottles of mature port (’63/’66/’70) recently and it really id pretty joyous stuff…a missed opportunity by many.
A fun evening with friends as we saw in 2016…