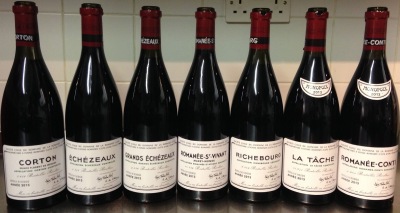 I try each year to document my notes of the Domaine de la Romanee-Conti wines. I did this with the DRC 2012’s actually at the Domaine last year which was a real treat. Last Tuesday saw the annual press tasting of the 2013’s – a vintage (the only vintage) I have been lucky enough to taste from barrel (see end of this POST). The wines are “finished” wines, served from bottle.

Corton* – Markedly redder than it has been for the last few vintages, the first being 2009. Crisp and almost crunchy. This was the wine that I found most different at lunch with more volume of wine, it became more juicy with a bit more grip and grit. This is what 2013 Corton should be like, to my mind anyhow.

Echezeaux* – To me this is the wine that showed a whole bunch character the most. Pencil shavings and a little grit, fine-grained pepper too. It was driven and fresh with lively acidity and red fruits at the core…a serious Echezeaux, uncompromising.
Grands Echezeaux – A deeper and more substantial nose. More stuffing, darker fruit, good structure and a nicely sappy edge also, this is balanced and in common with the Echezeaux is a serious rendition.
Romanee-Saint-Vivant* – I am totally biased here having seen this wine come to full blossom over the last 15 years. This is floral and red fruited and with sincere focus. Intense, poised and quite linear. There is a little spice but it stays firmly in the background. I think 2013 exaggerates the strengths of RSV. Superb.
Richebourg – A lot of people mentioned this as a real favourite, I love how different it is from RSV. I’d almost always have the RSV if I was on a desert island and had to choose but hopefully that won’t happen. The fruit is deeper and darker, blacker and more sturdy, as it should be. There is a little graphite and a very slight edge of orange rind. It’s slightly like a combination of Corton, Clos Vougeot and Richebourg.
La Tache – The word that springs to mind, especially after such significant differences in the other wines, is “completeness”. Elements of all the others and a seamless texture as well. There is that dash of spice and it is almost impossible to define the fruit as red or black as it is both. Refined and flamboyant in equal measure.
Romanee-Conti – Superb nose but somehow a little more one dimensional than La Tache. The palate is alive and very red-fruited and fresh a little like the RSV but with the texture of Tache. I am never worried by this wine not being head and shoulders above La Tache at this early stage. Romanee Conti always ages on its grace and harmony as this tasting taught me.
*the notes for these wines are an amalgam of the tasting and lunch.
The Montrachet is never shown at the tasting but I was lucky enough to try it over lunch afterwards.
Montrachet – Reduced nose (I love reduction), rich but not heavy. The palate has a balancing driven saline element that has a lot of energy to it. This is a cooler vintage Montrachet with great acidity, may be slightly less opulence. The nose over time lost the reductive covering with citrus, especially lemon, coming to the fore. This is in-line with the Montrachets from vintages like 2004 and 2007. Superb, cellar worthy and serious.
This is one of those days in the year that really makes me wish I had started my blog much earlier…