So, as I stand in the kitchen on summer holidays in the town of Correns in Provenance a little Chablis tasting has been lined up. Interestingly it is about one site – Vaillons – and two Vincents – Dampt and Dauvissat. The only variable across the three wines is vintage.

The wines were just “popped and poured” at 7pm and then re-assessed the following afternoon and evening…no decanting and just fridge storage in between times. 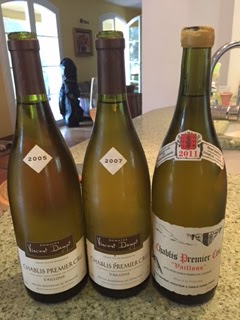 Chablis 1er Cru Vaillons 2005, Vincent Dampt – last but one bottle from a case, bought on release.

7pm – Citrus attack that mellows quickly. Slightly milky texture but with zip. There is a definite richness. A little mellow honey, dry honey if that is possible. A little resinous character, delicious and consistent with the other bottles I have had over the years.

3pm next day – Still with a good acidity and precision, limey nose, lovely textured palate, a little dry honey and a tiny bit of sweet nuttiness.

Overall: A cracking wine made all the more impressive by essentially being Vincent’s first stand alone vintage. There is generosity but it is in total balance. I really wish I had bought two cases not one and at £150 a dozen IB I should have!

3pm next day – Richer and more intense but not as fresh, a definite yeastiness, the more air the better this gets. It is a tricky wine to nail down.

Overall: This wine really ebbed and flowed, I was worried on first opening as it looked a little prematurely developed especially alongside the 2005 but both colour and aromas lifted and the wine was, whilst not as balanced as the 2005, very enjoyable.

7pm – This does show more opulence and richness, the fact they use wood does show but the Chablis character and acidity is not missing, although it is behind the rest of the unctuousness. This is focused but broad at the same time. Very good wine, more “foody” than the Dampts, arguably this is more harmonious but it is less fresh. There is wet stones in the background but with that dry honey appearing.

3pm next day – This has opened out but not necessarily in the best way it seems a little incomplete. The texture isn’t as fresh as it was.

Overall: It might be a little unfair to compare 2011 with 2007 and 2005 although most white Burgundy 2011s I have had recently have been very good if not amazingly serious. This was probably only just behind the 2005 on opening but the following day it had not progressed and some freshness had gone.

This was a nice little experiment of a tasting. Chablis remains a wine I like a great deal, it is so easily drinkable but capable of proper complexity at the same time. I do find tasting notes for Chablis as big a challenge as any wines, they are not easily described.