The first of a few posts I hope to nail today, a rather large, but good, backlog has built up. I was pretty knackered when this dinner came around but I was equally excited by both the prospect and the chance to see some of my very favourite wine folk – Eric, Mr Burns, Column, Mr Rafferty (jnr) and my favourite, but sadly on sabbatical, pumpkin chef!!

The venue was the Medlar Restaurant which is seeing a lot of action these days including these events. It came about through the wish to drink some Rinaldi, or Azienda Agricola Giuseppe Rinaldi to give it is full name, wines! Eric kindly co-ordinated this with Chris Delalonde at Medlar and everything was in place for a fun evening – expectation dangerously high.

To start, and after Burnsie had insisted on hugging everyone (is he really English), we had
Louis Roederer Cristal 1999. It was an amusing choice as I had only been saying in the office that day that of the prestige Champagnes it is the one I see served least at wine dinners. It was mellow and a little honeyed but not OTT at all. More biscuity than nutty and with some citrus. If you had to be critical it could do with a dash more verve and length but that really is nitpicking, lovely.

Predictably we then all had the Crab Raviolo, Medlar’s signature dish that has to be had. Alongside this we had Puligny-Montrachet 1er Cru Les Referts 2011 from Francois Carillon, here comes the usual bias warning but this is “a point” right now I think, in common with a lot of white Burgundy 2011s. A slight whiff of reduction  then easy yet rich fruit and lemon driven energy, a little spice on the finish…these two led us to the “work” at hand.

There are very few estates that I fearlessly buy totally “blind” – by this I mean I would buy more of these these Rinaldi wines than I can afford, at any chance I get. This doesn’t mean to say they are all brilliantly faultless and perfect – wine isn’t like that and arguably isn’t meant to be. However, if I think of the top ten producer labels that lift the spirits immediately then this is one (others include – Soldera, Conterno, Coche, Rousseau, DRC, Chave etc – must do that list one day). I have only visited Rinaldi once but it was memorable in the extreme. Beppe’s views and manor is well documented and long may it last. There will be a follow on to this post when we look at Barolo Cannubi S.Lorenzo-Ravera next month. The Rinaldi estate makes brilliant: Langhe Nebbiolo, Dolcetto, Barbera and Freisa but the focus tends to go to the two Barolo which I tried to explain at the end of the post here. Essentially from 2010 you can’t have two Crus on the same label so in crude terms. 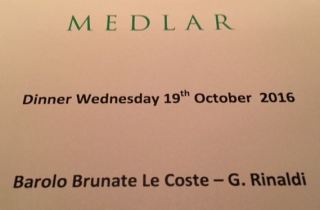 To add some confusion there have been vintages when a Brunate alone has been made and also quite often the magnums have been pure Brunate (*see notes at end of post for clarity with thanks to Ken Vastola). Right, enough facts…the wines. We attacked them three by three, deciding not to work by age but my vintage type, often a more fun and logical way to do things.

1997 – A predictably more evolved and less pure colour than the others in the flight. Saline and deep fruit with some cucumber-water (sorry but I know what I mean). Spice and cherry fruit, deep, a shade powdery in texture which somehow works. Good. Perfect now, will last but in 5 more years will be old and whilst in 20 years it’ll be interesting there is, for me, no real upside – enjoy now, degraded hedonism.

2003 – A little more cherry here and an almost candied note (that Monprivato and Cascina Francia both have in 2003 as well). There is a glycerol character here. If I had to draw a parallel with another producer in another region for this 2003 it would be Rayas, there is red fruited, Grenache like purity. When to drink is very tricky. If I had 12 bottles (as if!) I’d have drunk three by now, drink a bottle a year for the next six years or so, hold three just to see.

2007 – Tight, focussed, very fine, a shade muted on the nose, brilliantly saline on the palate. I know this wine quite well, a splendid 2007, does not show “warm” at all. Much as I would want to own more of this than any wine in the flight the 1997 is the wine I would drink most of right now. This is a 2007 to buy if you can find it!

Flight 2 – Brunate-Le Coste – The “should be a bit open” vintages.

Brunate Riserva 1986 – Ok so one of the exceptions I mentioned above and a wine I have had, and loved, once before in magnum also with Eric. A clouded texture, some frazzles and red fruit, degraded sweetness followed by a little bitterness. The mid-palate is a little quiet but the finish is super, a little herbal green drive at the end. Lovely. At it’s peak.

2000 – A bit of a brute. The only wine in the first two flights where I thought this would be good alone but not in this company. It’s a good wine, savoury and a bit adolescent right now. I feel I am being harsh but there is just a little sweetness missing. I’d love to try this again in 3-5 years.

2004 – Superb and universally the “wine of the night”, not that one is needed. Power and poise, drive and precision. Not ready to show everything but is appreciably good. My note says “what wine is all about”. Bold in density and structure but in no way too much. The nose is just sublime and the palate follows through. Don’t open for 5 years I recon because if you do you will just drink the bottles you have.

2001 – In Piedmont I have found quite a few 2001s to be just that bit too serious, too heavy. This is not one of them though Eric was a little disappointed in it. Savoury, serious and dense. Tight, a slightly soupy structure but a good savoury Bovril like finish, a real food wine (aren’t they all). I would take the same drinking approach as the 1999.

2005 – I almost didn’t mention this, we figured there was some labelling error with this bottle. The juice was not Nebbiolo and was more like 3-5 years old. Nice but not Nebbiolo…

1998 – This bottle was opened at the beginning of the evening and put to one side as it was a shade disappointing but we drank it again at the end and whilst it is a weak link and, on this showing, a lesser wine than the 1997 it is still true to the Nebbiolo grape if a little prematurely aged.

We had a most bizarre Champagne to finish and clearly the level of conversation deteriorated rapidly but then that that was to be expected.

Conclusions, or what auditors always refer to as the “opinion piece”. My feelings about this estate are unchanged…I will keep buying. There is so much character to these wines, a lack of compromise that I love. Is there more precision (in the same period of vintages), elsewhere in Piedmont? Yes for sure…but is better always actually better? The daughters are having more and more input and the precision is being refined. Recent bottles from 2008 and 2011 were simply stunning, moreish and intense without being in any way remotely a waste to drink now.

An iconic man? Yes. Iconic wines? They probably are but the thing is, I am not sure they want to be…drink them whenever you can.

——
*The labeling of Brunate with Le Coste  began with the 1993 vintage, when Beppe took over the winery from his father, Battista.  It was Battista  who (in the best vintages) bottled Brunate separately (and usually as a riserva) starting in 1964.  I think, but am not sure, that some Le Coste may have been in those old Brunates as well. Ken Vastola
www.finewinegeek.com