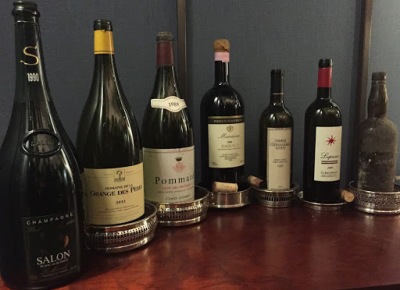 The Bunch get together each year to host a press tasting, each company showing 10 or so wines. The evening before there is a dinner which always has a theme, this years it was “a wine you won’t find on the internet”…the other instruction was for the quantity to be a magnum or two bottles. Two people from each “firm” gathered, back in September, at 67 Pall Mall to see what we were all offering up. Clearly people took the instruction to mean go for something rare or something random, or both…either way it lead to some interesting bottles:
Salon 1990 En Magnum – Not what “we” took before those that know me assume it was, though certainly the Champagne, with the exception of it’s sister Delamotte, that I know best. This was just delicious, enough lemon and other citrus but also enough of the easy 1990 feel to it…a splendid start!
Domaine de la Grange des Peres Blanc 2013 En Magnum – No prizes for guessing who bought this. Rare in bottles, even more so in magnums – less than two cases of mags make it into the UK. Served blind it had us all in a certain amount of trouble. The blend is 80% Roussanne, 10% Marsanne & 10% Chardonnay. It was superb but hard enough to put an age on it let alone a region etc. Gunflint, a tiny bit of new oak and a really resinous, waxy texture…splendid. I am sure this will age very well but is so good now.
Pommard Clos des Epeneaux 1989, Comte Armand En Magnum – This, I felt, was a perfect example of why one should buy magnums. I can’t imagine that this wine is anywhere near as good in bottle. Red and black fruits combined with a bit of degraded structure to make a wine that had charm and real drink-ability.
Barolo Meriame 2000, Paolo Manzone, En Magnum – Any “new” producer from Piedmont (well new to me) is always potentially exciting. This was drinking very well, as most 2000s are. A little bruised with that mature fruit feel but good balance, one to drink and enjoy.
Parker Estate 1st Growth 1990 – This was the offering a colleague and I had picked out and a wine served from two bottles, one a shade fresher than the other but both good in isolation. I never met John Parker who started the estate but from what I hear he was quite a character. Given that the vines were planted in 1985 and the “First Growth” was first made in 1988 this 1990 is a gem, it’s a gem anyway frankly but the youth of the vines adds a layer of amazement. Classical mellow Cabernet fruit and some tobacco, leather and a proper but fading structure.
Lupicaia 1999 – This Cabernet heavy blend from Castello del Terriccio has always flown slightly under the wire as far as I am concerned. There is good savoury richness and always a sense of depth and weight but not heaviness. Nice vintage the 1999.
Martinez 1948 – I love port as you’ll probably know and 1948 is a hell of a vintage, albeit that anything of this age is going to be variable. There were several interesting notes here, Demerara sugar, licorice, pine, iodine and some old oak. Possibly not a perfect showing but fascinating all the same.
A fun evening and certainly not a line up that will ever be replicated!