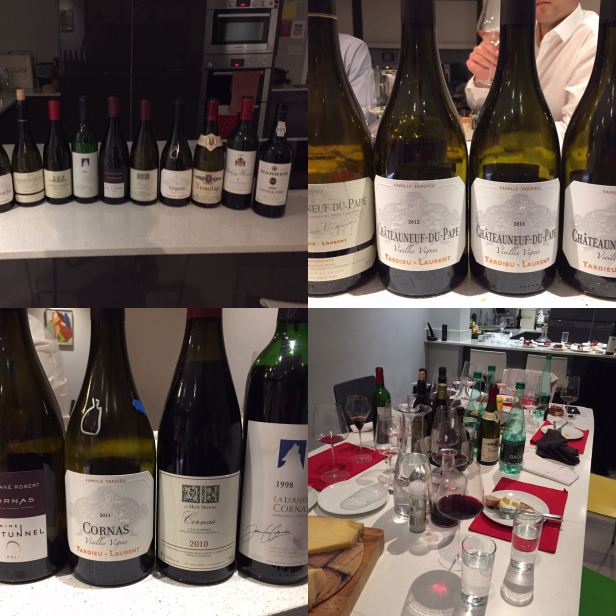 This evening was a little while in gestation but eventually we gathered Chez 194KPR for a Rhone evening. The assembled team were Egon, Guido, Zalto, Ditch and Little Will…The main focus was to be a wine I really love and wanted to have a proper look at…that wine is the CNDP VV Blanc from the Tardieu (of Tardieu-Laurent) family. I had carefully managed not to drink a few different vintages. After that the theme was just bring a bottle of Northern Rhone or anything or nothing.

Before we get going I’ll be honest and say that up until about three years ago I didn’t really take the Rhone all that seriously or at least I didn’t dedicate much time to it. But since then it has become something of a focus. This Rhone – An Epic Trip and dinners like this – Splendid CNDPs & Tardieu-Laurent – Dinner at 28-50 with Bastien Tardieu – have certainly helped.

Moet & Chandon 2008 started things off, the guests all being early (for once!). A nice glass with decent focus and some nice breadth, the dosage doesn’t seem to large either, all in all a good young vintage Champagne. So now it was time for the four Chateauneuf-du-Pape Vielles Vignes Blancs from 2014 back to 2011. All the 4 wines were chilled down and then double decanted (clumsily, deliberately) about 90 minutes before we drank them. We tried them in two glasses, the Zalto Universal and the Zalto Bordeaux, the later accentuated the richness and the Universal the focus, I preferred the Universal a little so that’s where my observations are noted from. The wine as a whole is 50% Grenache Blanc (60 years old) 50% Roussanne (30 years old) and comes from an amalgamation of three estates with holdings in – Les Serres, Le Belvedere and La Crau. From my notes it looks like the “Les Serres” was omitted from the 2014 but I’ll try to get clarification of that. The ageing, a real Tardieu specialty is done in a combination of new and 1yr old barrels, the mix depending on the vintage.

Chateauneuf-du-Pape Blanc Vieilles Vignes 2014 – This was a really tricky vintage that followed a mild winter and then had a dry spring before and cool summer. The wine has turned out very well, there is a richness in the background but fundamentally this is a wine of elegant weight. The oak passes into the background pretty quickly and there is a briney freshness. Lovely now but will age well.

Chateauneuf-du-Pape Blanc Vieilles Vignes 2013 – Ripe stone fruits, peach especially but with good focus and a nicely done texture, that briney character is there. I would be fairly confident that there is less new oak and that seems wise. There isn’t quite the latent power of the 2014 but its very good. Interestingly the last 20% of the wine in the bottle was delightful 48hours later. Impressive, I would drink sooner rather than later to get the fruit.

Chateauneuf-du-Pape Blanc Vieilles Vignes 2012 – the 2011/12 winter was very cold and then the summer of 2012 was very hot, when to pick was a crucial factor. This wine has much more viscosity and richness, a waxiness and unctuousness as well. The team were a bit divided, I think this is what it should be like and a few felt that maybe the richness was a little OTT and that the intensity of the growing season heat lead to slight warmth from alcohol (still only 14% though). I liked the decadence and slightly more honey fruit. V.good.

Chateauneuf-du-Pape Blanc Vieilles Vignes 2011 – Another slightly split decision here. A little bit of a one glass wonder to me. I liked the complexity and the slightly oxidative nature, dry honeycomb and wax but wonder how much of it I would drink. Some far preferred the freshness of the 2013/14 style.

So conclusions – This is a fascinating wine and in my view right up there with the best CNDP Blancs. I would love to see how the wine ages from here. Often people say of many Rhone whites (north and south) that they are best young or old and can become a little quirky in between (which would help explain the 2011s character). Given this is a wine that sells (on release) well below £350 a dozen you have pretty stunning value here.

The reds…the theme was Northern Rhone but we first had a nicely elegant  Chateau de Montfaucon Baron Louis 2012 from Lirac as an “aperitif” red, it had good elegant red fruit and some spice. Cheers Little Will. We then launched, without having really planned to do so, into a Cornas flight. Four different wines, four different producers, three different vintages. All of which went rather brilliantly with Mrs 194KPR’s cooking – for which much thanks!

Cornas 1998 La Louvee from Jean-Luc Colombo – A producer I know nothing about, very rare to have a Rhone wine in a Bordeaux shaped bottle. A nicely bruised and slightly degraded fruit, I flippantly said that if Francois Mitjavile made Cornas then this is what it would be like. It was a fully developed wine and balanced, a little of the varietal (Syrah) character was gone but all in all very nice. Nice Egon, thanks.

Cornas 2010 Les Combes from Mark Haisma – This was poised, tightish but elegant, good concentration but weightlessly so. I can imagine this may have been a little closed for the last 2-3 years now it is opening up, tannin mellowing and nice cool darker fruit and a little grey pepper showing through. Classy, nice choice Zalto.

Cornas VV 2011 from Tradieu-Laurent – This was my northern red, richly full, lots of oak before decanting. Post decant the oak was gone and a certain hedonistic fullness remained. This showed the pepper you want and the dark fruit. The structure is there, if I owned a case I’d be excited but for totally different reasons to the Haisma. The Haisma is an outside centre with a stunning girlfriend where the Tardieu is a back row forward who prefers a beer with his mates and proudly sports a pair of battered, and increasingly cauliflowered, ears.

Cornas 2011 from Stephane Robert of Domaine du Tunnel – You’d have to go back 4 years for the last Tunnel wine I have had. Guido made a good choice here and to see another 2011 was interesting. This had good elegance, dark fruit but with good acidity. It maybe doesn’t quite have that rugged, rough and ready “attitude” you want from Cornas but that’s a very picky criticism. Succulent and a wee bit suave.

Hermitage 1994 from J.L.Chave – Was a second bottle from Egon. If you are looking at the wines of the Northern Rhone then this is the one producer who “nails it” every year. There are consistent traits to Chave’s Hermitage but the most impressive thing is the portrayal of the vintage. In this there is a little whiff of creosote, a lovely edge of degraded red fruit (degraded fruit almost always seems to be red not black). It is absolutely delicious now, savoury and ripe but red with a lot of minerality and slatey-ness. It’ll keep for ages but strikes me as being spot-on now, just lovely.

The theme then broke-down but that doesn’t matter, Ditch brought Chateau Musar 1999. Now, I don’t know a wine estate that has peaked more interest in peoples formative palates than Musar. There’s that mellow funkiness, the sweetness, the leather, the animal and then you are told it is from Lebanon!! I remember being intrigued the first time I had it and this is the first time in a little while that I’ve had it and I really liked it again, I knew what to expect but it still fascinates. I had a bottle of Warre’s 1994 in the Eurocave and whilst the whole preparation may have been a little hurried we (Egon and I) decided earlier in the night that it’d be nice to serve it as it is Little Will’s birthyear! (depressing given it was the year I left school!). It is a splendid wine and Port has always been special to me, it’s the wine that first got me into the whole “wine thing”. It was wonderful to do this trip to the Douro last year.