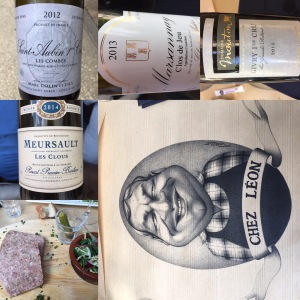 This was a special weekend. Earlier in the year we, C&B, were asked to get a few top customers together and head to Domaine Leflaive to be at the Tricentenaire celebration of the Leflaive famille being in Puligny. We were a party of twelve all in all. Everyone was asked to make their way to Dijon for a relaxed luncheon. We all gathered at Chez Leon in the town centre. The wine list is basic, no bad thing given where we would be dinning later, but the food was good and the service swift and good spirited. As an aside the taxi driver we had for the small journey from Dijon Gare to the restaurant was charming, educational and spoke perfect English. You combine this with the service at Chez Leon and you see just how easy it is for a place to make visitors welcome and positive about a place. Quite scary how often things work the opposite way.

Ater the lunch we all made our way to the lodgings Chateau de Gilly – about equidistant between Dijon and Puligny. It was a good place to stay, pool, big rooms and nice grounds. After the early start most of the team hit the hay. Meeting time on the terrace 6pm.

Having enjoyed a quick glass of rose we got to the cars and headed to Puligny to the Domaine Leflaive Cuvage which has seen a revamp recently, a very elegant and classy set up indeed. As Brice de La Morandiere commented it is only the small size of the 2016 harvest that “allowed” the reception to be held here. The Bourgogne Blanc 2013 was served and woke the tastebuds nicely, good fruit, zippy acidity and a moreishness.

After Brice’s welcome speech we all walked the 300 metres or so across to the Domaine in which a large and rather grand, glass topped, marquee had been assembled in the courtyard. Dinner was preceded by a few comments by both Michel Bettane and Allen Meadows about the estate and the wines.

Dinner was served to about 250 guests with a pair of wines with each course.

We started with two of the 1er Crus – Clavoillon and Folatieres. It was a fascinating pair.

Puligny-Montrachet 1er Cru Clavoillon 2005 – This was Rich and full as the vintage should be (a vintage Allen Meadows described as “riper than classic”), nuts and a little bit of almost Champagne biscuity character, a little savoury, at a nice stage now. Clavoillon has been the rising star of the last decade or more at the domaine, this showed the start of this progression well.

Puligny-Montrachet 1er Cru Les Folatieres 1993 – Was a different beast all together. I made a note of ripe asparagus water, I sort of know what I mean. Good complexity, some spice and a few ginger notes. Good wine this. Lovely oily texture but without being heavy.

With the main course it was Grand Cru time, as you might imagine.

Batard-Montrachet Grand Cru 1995 The Domaine have 1/6th of the holdings here. This was fully mature, quite broad, the most mature of all the wines on the evening. Richly savoury. Opulent.

Chevalier-Montrachet Grand Cru 1999 – I have always had a real thing about the Leflaive 1999s. They are glorious. Bienvenues-Batard-Montrachet 1999 is amongst the best wines I have had and I am not alone in this thinking. You can imagine how excited I was to see this in the line-up. Even in this exalted company this was a star performer. Salt, cocoa bean, amazing energy and drive, good but effortless acidity. My scribbling ends “Very fine. Long. Love this! Special!”. That kind of sums it up really.

Blagny 1er Cru Sous Le Dos d’Ane 2002 – En Magnum, I would want to check before being 100% sure but I think this is the last red wine the Domaine made. The “Sous Le Dos d’Ane” holdings having been planted over to Chardonnay over a short spell in the late 90s/early 00s. The Meursault has been made since 2000. This had good purity and a sappy fruit. Nice.

Puligny-Montrachet 1er Cru Les Combettes 2000 – We always have a goodhearted squabble in the office over which of the Domaine’s 1er Crus is our favourite. For many/most it is the classic choice of Pucelles but for a few it is this – Combettes. I may, just about, be in the former camp on balance but, and this may sound odd saying that, if either were to be upgraded to Grand Cru it would be Combettes. This was absolutely terrific, a really opulently cheesy nose, like epoisses but somehow also has a toffee element too. This is debauched, decadent and delicious. There is also an element of saline in the same way as you find salty crystals in aged comte. If there is such a thing as a pudding white Burgundy then this is it. A perfect choice for the end of this meal!

With our chariots about to turn to pumpkins we hit the road – a splendid evening, a special Domaine and a real honour to be there.

When you take a group of wine lovers away it is always tricky to arrive back at the hotel and just say “good night” so we had lined up a few cigars (Rafael Gonzalez Petit Corona – BRA Sep 2012 – for those that like this detail), a little Champagne (Jacquesson) and a bottle of Fine de Bourgogne, de Vogue all of which disappeared of a fun hour or so of chatting. Quite an evening…

So, as one of the chaps said “so what date is the 301st anniversary?”