Back in early November Guy (Seddon) and I dashed out to do a few visits in Piedmont. Now, most of these were to keep up with a couple of prospects but we had to swing by Serradenari where we work closely with Giulia Negri. Giulia was in the states but we were brilliantly looked after by her father Giovanni – very much a wine man. I know the wines very well but always enjoy tasting here. Not only is there the three Barolos – Tartufaia, Serradenari and La Delizia alongside the Barbera but there is also Chardonnay and Pinot Noir – Giulia being a massive fan of Burgundy. 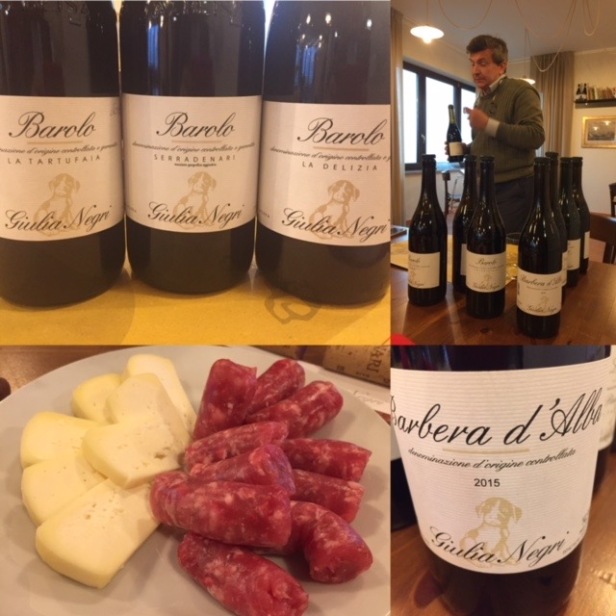 I am not, for obvious reasons, going to write up the prospective tastings much as I would love to (I have the notes). One of the highlights of this overnight trip was always going to be catching up with Sam and Megan, great friends from the mighty Zucca days! We had thought to go to Centro Storico but it was a Monday and Alessio is closed. Sam suggested another spot in Serralunga – Osteria Tre Case. It was terrific, I hope the pics below do it justice. The food is done in a classical but elegant way – a little like the Zucca style. I didn’t much about my order – Vitello Tonnato, Ragu and veal – Sam and Megan both guessed exactly what I would go for.

We had some good bottles in amongst the brilliant chance to catch up. We started with “Pinner” Vino Bianco Ottenato da Uva Nera 2015 from Cavallotto which has the tiniest bit of blush colour to it, just like a white wine poured into a glass that has a drop of red wine left at the bottom. I like the texture and fullness but with a fresh touch underneath. It is a very easy wine to underestimate – try it. From there we went on to Nebbiolo – “when in Rome” etc – and more specifically to Cappellano. The Barolo Pie Rupestris 2012 is a lovely bottle showing depth, a little saline and a darker, but fresh, fruit. Very true to Serralunga but showing how these wines do not “have” to be aged. The Barolo 2010 Terlo Ravera from Marziano Abbona that we had next was a new one to me. A more saturated style but very good, a little more lush. The last of the bottle for the evening was another Serralunga Barolo (and this restaurant used to ONLY do Barolos from Serralunga – now that is niche!) Barolo Vigna Caterina 2012 by Guido Porro. This would, in retrospect, have been sensible to have had alongside the Cappellano. Porro is a great value producer and definitely one to follow when you see it on a wine list – go for it. We did manage a post-dinner digestive of Barolo Chinato, the bottle was one of Cappellano’s and they are THE people for Chinato. I love this drink, some don’t, if you can (but probably not with a Cappellano) try it instead of the Vermouth in a Negroni.

It is a restaurant I will be returning to and have already recommended to others. 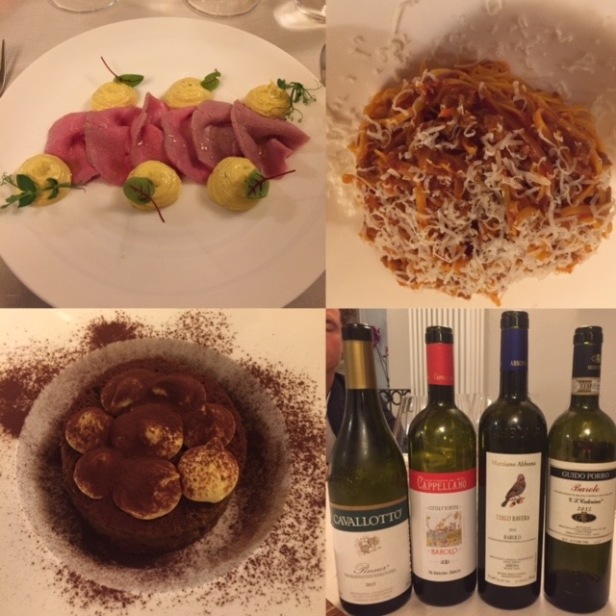 The following morning, it finally wasn’t raining, we had a few minutes to “kill” between appointments so we swung by “Francia” (it was, and will be again, “Cascina Francia”). It’s a vineyard I, unsurprisingly, love (professional bias) and for me the most important in the region. The aspect is a special on and being, as it is, at the very SouthEast corner of the region you can see why it is often a little contrary when it comes to how it performs vis a vis the “vintage chart” for the region.

I managed to get to Piedmont quite often, at least once, normally twice, a year and would recommend it to anyone. I will soon, in the wrong order, do my write-up of the June visit to Roberto Conterno which features a great trip to Cesare and to Giulia Negri. I cant wait to be there again!!

One thought on “A quick dash to Piedmont”