When it comes to comprehensive tastings of the great names and estates of Burgundy and Bordeaux there is really only on London based person to go to – Jordi. For something of an insight please just look HERE. We were brilliantly looked after on the night, as ever, at La Trompette.

Here is a little background, certainly not my writing – Château Ausone has been a Premier Grand Cru Classé since 1955 as well as the incontestable regent of the Saint-Émilion crus on the plateau for over a century. It is believed that Ausone is named after Magnus Ausonius, a roman poet from the 4th century AD that owned 100 acres of vineyard and a villa in St-Émilion. It expands over 7ha and produces a mere 10,000 bottles a year, a small rarity in Bordeaux terms. The cépage today is as high as sixty per cent Cabernet Franc, the remaining being Merlot. The modern foundations were developed by Jane Cantenat in the 18th century, while it was the Lafargue family that passed its ownership via inheritance to Edouard Dubois in the late 19th century. After Edouard’s death the Vauthier family took joint control via marriage to the Dubois-Challon, until 1997 when the Vauthier’s bought the Dubois shares.

A large proportion of the older vintages for this tasting were source from the ever yielding Avery’s cellar.

1988 Moët & Chandon Dom Pérignon en magnum was served with Canapés and had exactly the nice full toasty notes you expect of a 1988 a delicious appetite builder.

Anjou pigeon, hen of the woods and black beans was the accompaniment to the first flight.

Ausone 1999 – Pungent, serious note, some dryness, mellow for all that, a tad short of the finish but good in all for a tricky, sometimes lean, vintage.

Ausone 1996 – Corked sadly, I did taste anyway and whilst I can’t comment on the aromas as the cork-taint was vey clear the texture was good and had an in-check generosity.

Ausone 1992 – Lovely balance, delicious nose, very light as you’d expect from a wet and cool year. Nice cheesecloth nose, became quite herbal as the fruit is light but all in all a good gentle wine.

Ausone 1985 – Had a nose of (tasting note I haven’t used for a while) mushroom water, stripped of fruit, this is old but not out of balance. Would love to hear from others who have had this. I can’t think it is is a true representation.

Ausone 1983 – Tobacco and old mint. Good, quite bold nose, then an old soul. This stayed exactly this way for some time. I liked it.

Spatzle, black truffle and Parmesan went aside the second flight.

Ausone 1979 – Good acidity, good drive on the nose, lively. I’d have been in Italy if tasted blind. Nice wine, bricky and evolved but with some nice redder fruit, a focused nose.

Ausone 1975 – Gamey and a little smoky, this has a lot going for it (birth year bias aside). A little farmyard, very classically aged, has a good acidity. Lovely.

Ausone 1974 – Iodine and good body, quite lean but not bad at all from this most dreary of vintages.

Ausone 1973 – Iodine, good notes of Lapsang Suchong, a little metallic too, not great but interesting.

Ausone 1971 – Sweetly degraded, nice wine, this is good stuff! Quite savoury but lovely, masculine and then a little sweet. Iodine came through on the finish.

Ausone 1970 – Slightly lean, a little overly dry, tellingly it got better with air.

Ausone 1969 – Nicely delicate, good wine this, finely done. Not overt but balanced.

Ausone 1967 – Proper, nice wine, tiny hint of caramel in the mouth, good concentration, you could say it was a little crude on the finish. Good.

Ausone 1966 –  Pungently inky richness. Has a spicy pine note then iodine and some green pepper, almost too big. Impressive.

Ausone 1961 – Exactly like a mellow cola bottle, fleshy nose, really like this too, pine and spice, just so mellow and easy.

Ausone 1960 – Demerara, slightly oxidised, not correct but you can see the core of the wine.

Ausone 1956 – A little weary, still shows decent concentration, made the most of the vintage. Some herbs and menthol notes, a little incomplete but ok.

Ausone 1955 – Dense wine as 1955s so often seem to be. Masculine with a savoury richness. Good wine, bold tannins.

Ausone 1952 – Like Bual Madeira on the nose, this isn’t what it could/should be.

Ausone 1950 – Poised and great on the nose, delicious. I didn’t write many notes, just enjoyed it, big surprise. 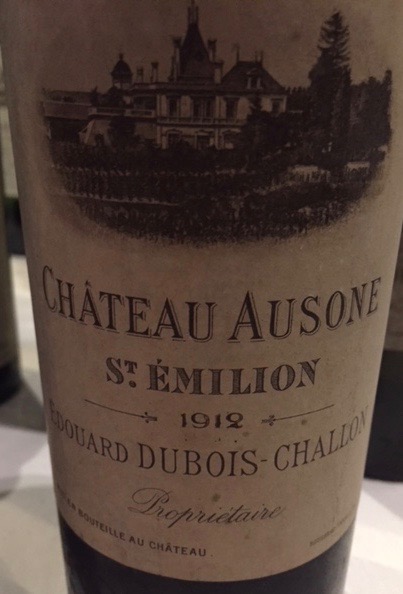 Comte of two different ages took on the “old(er)” bottles…

Ausone 1947 – Super wine this, spicy nose, less complete on the palate. Soy and an almost teriyaki like note on the end. Lively.

Ausone 1943 – Maderised in part, Bual then Malmsey – not a true representation.

Ausone 1912 – Has a shade of Whisky about the nose, a dash of Islay. A shade thin as it has the right to be. I like this, I drank it all, delicate but balanced.

And now, thanks for Jordi, I know a little bit more about Ausone!