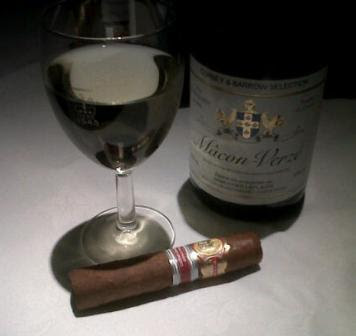 Last night was a truly memorable evening at a wonderful location – The House of the Nobleman http://houseofthenobleman.com/partners.html – in which there is strikingly excellent Gallery space which amongst others currently houses several photographs from the renowned photographer Alistair Morrison.

Yesterday was all about Cigars, Wine, Cigar people & photography. Alistair has a project on the go called Fuma Divina, a book of Cigar smokers portraits that you will have to ask about, it is very special, and also an exhibition of cigar related photographs more details here http://www.alistairmorrison.com/projects/fuma-divina/.
The event was a combination of several peoples work and judging by the packed room one that will be repeated.Laurence Davis of Sautters of Mount Street (http://www.sauttercigars.com/) great people with a similar attitude to cigars that we have to wine, spoke about the two cigars and I spoke about the wines.
What resulted was the most smoky and decadent room in London, a top Monday night! We had two combinations – El Rey del Mundo ‘Choix de l’Epoque’ a UK Regional Edition for 2009 with Macon Verze 2009, Domaines Leflaive. The cigar is essentially a short Robusto (50 ring gauge by 4 and a bit inches), a straw and hay like aroma and a just under medium body, it worked well with the Macon Verze which has great fruit but also a good texture. The 2009 is drinking really well know, a dash of opulence with acidity to keep it in check. I had never had the L’Epoque before and was impressed.

After most people has tried the first pairing we moved on to Ramon Allones, Allones Extra a Limited Edition for 2011 with Psi 2009, Peter Sisseck. I had bought a box of these smokes on recommendation but never tried one and I was delighted. A rich stewed fruitcake character that I associate with Ramon Allones was there from the off, it started at just above Medium and came back after the first third to medium, these will age brilliantly as there is real complexitiy and clout. The Psi was a great foil for the cigar, Tempranillo often is, as it had a sweet fruit but very little oak and a rich palate coating texture that made for really balanced enjoyment. The 2009 Psi has started to hit it stride in the last month after arriving about 6 months ago, it’ll give a lot of pleasure. I must alos mention that there were some very high class ash trays and immaculate Humidors on display from Linley – very special things to own. My over-riding impression was of a room packed with fun and banter. The world of Cigar smokes is a broad church and all the better for it!
If you would be interested in similar events please let me know!

One thought on “Cigars, Wine & Photography all in a Nobleman’s House”