Skip to content
Date: March 19, 2012Author: 194kpr 0 Comments
On Saturday I was lucky enough to Join “Sussex” as a guest of “Halifax’s” – these two characters have appeared a few times before on the blog – at Twickenham for the England vs Ireland game.

But first we thought, wine lovers to the core, that we’d better have lunch so off to Zucca we went. The food was immaculate as always – 5 starters shared between us then Pork shoulder and the job was done, full but still awake, I love the food there.
So what wines did we have? Sussex brought along – Billecart Clos Saint-Hilaire 1996 – I really loved this, vinous, it is a Pinot heavy blend, there is weight and a lovely “old gold” colour, served in proper wider glasses helped (Zucca is good at these details), it was lovely immediately but got better and better. I noted a slight hint of Selosse-like oxidation, I like this character, bloody good stuff, ready but no rush, impressive. For the reds Halifax had kind bought one Burgundy and one Bordeaux. As an aside I like different regions along side each other as two of the same inevitably leads to a competition.
So first the Burg, Clos de la Roche 1999 Le Moine, rich, full, quite dense and young were the first thoughts, not over-oaked at all, but no shrinking violet, the fruit was darker than red, I liked the nose, a little warmth on the palate, it opened up after 25-30mins in the glass. I enjoyed it, it did have true Gevrey character, muscularit

y and some grunt, if I had some I would re-visit in at least 3-5 years, I feel more charm will appear. This is/was the first vintage of this particular wine.
And so to the Bordeaux, Vieux Chateau Certan (aka VCC) 1990, straight of the bat this was lovely, real drinkers Pomerol, classy, slick but not too polished, very very balanced, the fruit came in complex waves, the structure was there but never awkward, a very fine Claret. I don’t think I would have got the vintage blind, I might have said 1985 as this wine had a cool elegance, it had no awkward high/extracted notes that you can sometimes get with the extravagance of 1989 & 1990. This was the sort of wine where you could savour a glass but you’d just as easily drink a bottle in double quick time…really impressed me. Makes you wonder if the modern Bordeaux will ever be quite so graceful? From there is was train to Twickenham and Guinness before we saw the English front five “do a job” on the Irish, a strange game really, lots of handling errors but as ever it just shows Rugby is a game for people of all shapes and sizes as you need that for the front five, long may that continue… 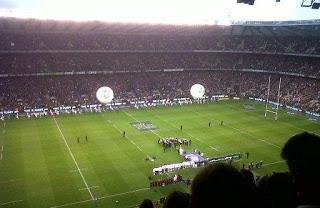