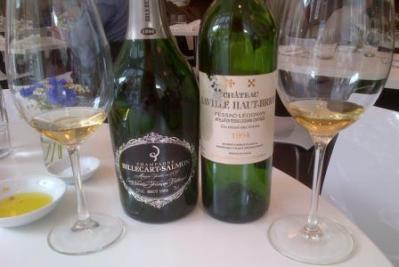 Last Tuesday was a great wine day with a lunch and then a dinner. First up was lunch with “Hailfax” (he features elsewhere on this blog) at Zucca – yes, yes I know but if you love somewhere keep going. The wines were not supplied by me and I knew the second would be blind. First up was a delicious bottle of Billecart Salomon Cuvee Francois Billecart 1996 which had a foot in both camps, youth and age. This went well with the normal array of starters – you must get many and share when you go to Zucca. The white was up next, I liked it and it released more and more as it warmed up that little bit, there was waxiness and a lot of texture so I was off to the Rhone, thinking mid 1990’s. As it turns out I was right for the vintage, which was 1994 but in the wrong region. The wine was Laville Haut Brion 1994, for what it is worth this wine is now called La Mission Haut Brion Blanc. It was fascinating and I was disappointed not to have spotted it, it is was rich yet fresh and very complex. It did remind me of the 1983 and 1990 I had a few years back (also courtesy of Halifax). For Bordeaux the 1994 vintage was certainly best in the dry whites. This was a real treat and went brilliantly with the swordfish. Halifax then went off for cigar before meeting more members of the Northern mafia for a dinner that having heard the wines from was somewhat immense.

My evening was to be at the Zetter Town House with François Labet, a friend did a guest blog on the C&;B blog that has more precise info (Here), I will deal with my views on the wines. First up we had two whites from Dom Pierre Labet both from the good but not immaculate 2009 vintage (for whites that is) – I like them both. Meursault Les Tillets was rich on the nose but with freshness, the oak showed but in a classy way, good texture, nicely Meursault, lots of medium term pleasure to come. Beaune Clos du Dessus des Marconnets Blanc was more subdued, lighter softer structure, it was well balanced just holding back a little something. From here we stayed with the Domaine Pierre Labet but moved over to the reds, also 2009’s. Beaune Clos du Dessus des Marconnets had good red/black fruit in a saturated and rich style, good tannins, ripe but grippy. It was paired with Beaune 1er cru Coucherais which was definitely a step up, had a savoury edge to go with the fruit, will age really well, integrated power and grace, really promising. Arguably we then moved onto the “real deal”, although this is a little unfair on the lovely Pierre Labet wines, that is Chateau de la Tour Clos Vougeot Grand Cru. Francois has the largest holding in this most complex of Grand crus, with 6 of the 50 hectares. There is 100% new oak (the cooper tastes the wine before selecting the barrels) and 100% whole pressing. The wines are unapologetically made for the long term. The 2010’s have had rave reviews and rightly so. On this occasion we were to have the Vielles Vignes from 2001, 1998 (in mag) & 1999. We started with the 2001 and 1998. The 2001 has a lovely balance of flavour aspects with a dash of everything, ripe richness, dark black fruit with a little element of redness, a dash (and no more) of evolution. On the palate the wine is tighter than the nose suggests there is proper grip here, where many 2001’s are generally more feminine and pretty this is more masculine and serious. Very impressive. The 1998 could not have been more of a contrast while still having the same DNA, there is a soft decayed decadence, this is a hedonists wine, bruised fruit and slightly sweaty it is both savoury and sweet, I loved it and for drinking now it is excellent, reminded me ever so slightly of Chambertin. So having had these contrasting vintages it was time for a vintage about as serious as they come, 1999. Francois described it as the “prototype for a large sunny vintage”. Again rich, dense and decadent on the nose, structure shows well, big but balanced, this is a serious wine for the long-haul, a “do not touch” for 10 years scenario in my book. Francois spoke very well and his full run down of vintages from 1998 to 2011 was fascinating. I just wish I could remember it all!! 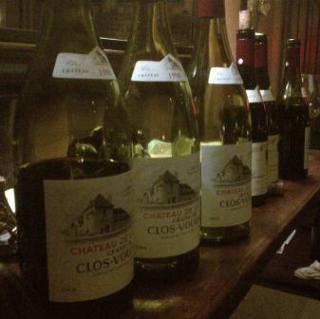