This is one of those posts more aimed at helping my own memory than anything else. It is a run down of some of the interesting wines and cigars from a break in L’Escala that ended a week ago. I did a slightly similar post to this last year which you can see here.
I took a few smokes with me as I did not know how quickly I would be able to get to the local “Tabac”.
On the first night having arrived and restored ourselves on pasta I lit up a Partagas Serie D No 4 (MGR May 2012), it is one of the last of a box split I did a while back and they have all been good, yes they are young but when you want to get just what you are after these deliver, rich, full but not heavy a cracking smoke.

Having gone off to get a big shop done the next morning I was really pleased to have discovered Gin Giro, not a Gin I know and as the holiday went on I saw it in a lot of bars as a “house” gin, not expensive, say 10€, it was delicious and good enough that we got through two bottles in the couple of weeks we were there. It is nothing ground breaking but just seriously enjoyable.
On the second night we had a simple supper and a couple of bottles from a producer who I imagine, I’ve not done my research, is a local co-op: Ramon Roqueta. All the wines we had from him were fruit forward, in no way overdone, I enjoyed them all without ever being excited, perfect holiday “drinkers”. After that supper it was time for another smoke I had taken with me, Quai d’Orsay Corona (OGA Nov 2011), now this was good but they need time, proper time. And the time they need is not for them to mellow it is for them to evolve. For a wine analogy it is not that the tannin needs to drop away it is that the fruit needs to come out.
I managed, on day three, to get to a Tabac but it was not the one I usually use in L’Escala (Josep Ma.Galceran, 17130 L’Escala) but Casa Cigar – Casa Tabac, 17257 Torroella de Montgri. When I saw this new, to me, shop I was excited as the selection was good, eclectic and the humidor room a decent size but as I found out when I went back to my default L’escala supplier (Galceran) the cigars were just not so well stored. I picked up a few things though and will comment on then later in this blog. 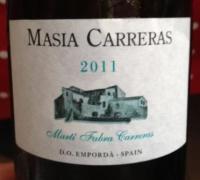 At friends we had a real treat of a Paella following some lovely simple and well sourced tapas. With the Paella and after a large Campari and tonic we had Masia Carreras 2011 which was delicious and local, waxy but fruited and fresh…a fellow wine trader did a great googling job when I tweeted about it and I can report it is from Carinena Blanca & Roja, Garnacha Blanca & Gris and Picpoul that then sees 12 months in French oak. It was a splendid evening with several other things opened and a also a great combination in the form of Pineapple with chilli salt and pepper. The cigar to end it was a Hoyo de Monterrey Petit Robusto from Casa Cigar, it was a total “wind tunnel” completely underfilled and had I had anything else with me it would have been binned. I was jealous of the San Cristobel I had given out host!

The local wine region, D.O.Emporda, is an exciting one and one of the main, slightly more branded, names seems to be Castillo Perelada. We had one of there wines, Gigonyes 2011, which I enjoyed it was a dash clumsy but as the name suggests a definite “Gigondas-a-like”. The same evening it was time to have my first proper non Cuban cigar in years (about ten years!) a Davidoff Special “R” Robusto. This was a good smoke straight into stride and very well rolled, good burn, no issues. Just below medium in strength. I liked it but felt no need to buy more.

One of the cigar finds of the trip was an aged Trinidad Fundadores, I know it was aged because it had the old band on it but I don’t know how aged. We had a lucky break one day and managed to borrow a house with a pool for the day so what better thing than a nice long smoke. It was delicious, mellow opening than built a bit, always on the tea side of the spectrum, old leather too…just lovely. That same evening I followed it up with a Cohiba Behike 52, my cigar of the year a few years ago. I felt this Behike needed masses of time. It was disapointing as the tobacco is aged and whilst you can put these away they should be good straight from the box. It was a tad bitter and just had espresso and density but nothing more. I’ll have to try another as I have now had two and they were very different but at 28Euro a stick it is hard to just “have another go”.

The following evening was, cigar wise, a bit of a revisiting session. The smoke in question was a R&J Cedros de Luxe No3. You hardly ever see these anymore but they used to be pretty widely available. R&J (Romeo and Julietta) are a weird cigar brand, well-known but not often smoked, with some great sticks (Cazadores) and a lot of mediocre nothingness. The Cedros range are all individually wrapped in cedar. This was a lovely gentle, mellow, tea and fruitcake smoke that I really enjoyed.

When we hosted the return fixture from the Paella evening it was a time to upgrade the wines a little…they were Martin Codax Albarino 2012, Terras Gauda Rias Baixas 2011, Amic Clos d’Agon 2011 and Condado de Haza 2008. The Codax was good, steady clean fruited but not dull. The Terras Gauda was one of my wines of the holiday without doubt, it had a wonderful savoury complexity but was also very moreish, a hard combination to pull off, I could have drunk a lot of it! Of the reds on this showing I far preferred the clean fresh fruitedness of the Amic which was juicy, ripe but not bruised or degraded, lovely. The Condado suffered but comparison as I feel it was a little too young and that made it appear fruit-deficient. Having a full belly and a nice amount of the wine “onboard” it was time for smoke and the Diplomaticos Coleccion Privida RE Espana 2012 Petit Robusto (BRA Sep 2012) did just the job. This regional release for Spain is a hard one to understand as there is only one Diplomaticos in production, the No 2, but then they release this. It was espresso like but had a lovely sweetness and intensity, great stuff.

On the last night but one we went for a meal at Can Miquel, the wine list is very good. I went for a bottle of Numanthia 2006 for a couple of reasons, firstly that I had never had it before having sold a bit of it over the years but also becasue the food is good hearty and richly sauced! It is not the sort of thing I would want often, sees a fair bit of oak but was perfect here and is well made with fruit that is just the right side of being over the top. After dinner it was time for a Sancho Panza Non Plus. A cigar I have a real soft spot for as it was the smoke that first got me into cigars, it was a dash salty as ever and mellow, medium at most, delicious.
Then with unnecessary haste it was the last night and after making a “what’s in the fridge” pasta dinner it was “final cigar of the holiday” time and I was not disappointed by the Bolivar Royal Corona (MUR July 2012). Always a shame when holidays are over but it was a very good one!