Last thursday was a chance to say bye to one member of the team and to wish another well in a change of location. The chosen venue was Le Cafe Anglais in west London, near Queensway. After a couple of pints of Directors to calibrate things the nine of us moved to restaurant to get started.
With the exception of those wines below with an * all the wines were very generously supplied by “Mossy”. He lived and worked in Australia which when you look at the line up will be no great surprise.

The “Kick-off” fizz was served blind and after brief guesses at Prosecco amongst other things it was revealed to be Sparkling St.Peray, Earl du Biguet from J.L et Francois Thiers* incredibly primary and soft. Given how good some of the still St.Perays are now you can see why still wine in more the thing in this commune now. The next wine was blind and served with an assortment of great starters. We all assumed that being from Mossy that it was Aussie but eventually he stopped stringing us along and revealed it was German, we got to Rheingau fairly swiftly from there…it was Rheingua Rudesheimer Berg Rottland 2000, Weingut G.H. von Mumm. I liked it, generous, waxy, mature with a complex gently fruited nose and well balanced.

We needed one more white next as Mossy’s next wine was earmarked to accompany a rather good piece of Hake. I had a look at the list and settled on Reisling Trocken 2008, Sybille Kuntz* for a couple of reasons. Firstly I don’t know I have ever had a wine made by a “Sybille” and secondly it would be nice to compare to the former wine. It was not as Interesting as the Mumm but was good, clean, fresh stone fruit and a mineral finish.
What came next, Tyrrell’s Vat 47 Pinot Chardonnay 1996, is one of the best, most interesting and serious white wines I have had this year. Generous and almost Lafon-like in structure it had notes of coffee and mocha as well as being rich and unctuous but not without some lime like fruit and balancing acidity…delicious.
A long line of reds was ahead of us and most accompanied a choice of Lamb or Chicken, I went with the former and as the picture at the bottom shows it was both cooked to perfection and generous, a good combination! The first red was Cullen Pinot Noir 2001 from Margaret River which had a little sweetness, well integrated oak, a smooth slightly polished feel, then behind the soft berry fruit was a herbal side. Perfect now I don’t think this will develop rather just fade, enjoyable warm climate Pinot. 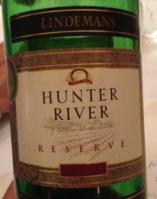 Gaia 1996 from Grosset in Clare Valley was up next and did not disappoint. Rich and generous, black fruit concentration and a little fennel coming through, rich but not heavy, at a lovely stage in its evolution. A very classical “left bank” blend.
Cape Mentelle Cabernet Sauvignon 1992, that followed was charming as well, had a very traditional dusty element on the nose that moved away. The style was good it was not quite as balanced as the Grosset but was a lovely contrast. What followed, Jasper Hill Shiraz 1987, was one of the stars, with real white pepper and dark, almost black, fruit, good depth and not showing anything like the age it has.
If ever there was a contrast between cheap looking label and good wine then the next bottle is a major candidate, Lindemans Steven Vineyard 1991. There was a rich essence of cassis, a little stink initially which went, a leathery edge as well as cumin, really fascinating.

All the wines performed well with the exception of James Irvine Grand Merlot 1992 which was not corked but was very “high” it got progressively better on a few re-tastes but never quite settled.
Time for some sweeties and for possibly the most unique bottle of the night, Petaluma Botrytis Reisling 1982 in an amazingly sized 340ml it was unctuous, pure tarte tatin, with that lovely bruised apple acidity a really cracking experience. The next half of sweet was a little passed it. The Mitchelton Airstrip 1997 had a lovely nose but it just didn’t follow through on the palate. One final wine followed blind and of course nobody got the grape variety as it was Cape Mentelle Zinfandel 1996. It was a really interesting curio. To be honest it did not show the age at all.
A cracking evening was over!