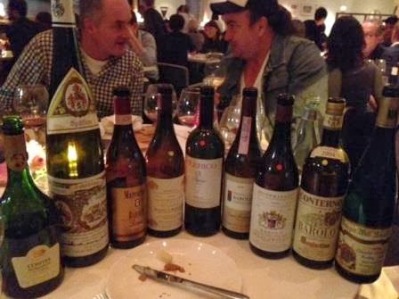 A splendid bunch of chaps from a well-known Suffolk wine merchant (that’s all I’m saying) had been threatening a trip to Zucca for a while. Their passion (to an extent new found) for Barolo meant it had to be the wine theme.
We kicked off with a really lovely bottle of Tattinger Comte de Champagne 2002. I think this was the first time I have had it. It had a lemony focus but was very easy to drink. I would imagine a mag would have gone quickly, the bottle “evaporated” at speed. The only thing that surprised me about the Comte was the relatively high level of “sweetness”, it must have a decent dosage, either that of the vintage is just so expressive. It will be fascinating, and enjoyable, to see how it evolves over the years.
The six Barolos (I’m trying to give up on the phrase Baroli) were book-ended by Germans. The first was Maximin Grünhäuser Abtsberg Spätlese 2001 from magnum a very low, for Spatlese, alcohol of only 7%. The wine was good, nice but not more than that, a little “spread out” and loose, lacking focus. I feel I am being overly harsh bt it was just that a little bit of the zip had gone. Others who knew the wine from other bottles certainly suggested this.
So with the food coming at a good pace we were onto the Barolos in 3 pairs. First: Barolo Brunate 2004 from Marcarini and Barolo Santo Stefano 2004 from G.Mascarello. The Brunate was a slightly odd bottle, not so much faulty as just not a great one, I liked the sour cherry fruit to start but it did seem to “split” a bit, one diner noting it just showed too much alcohol. I have had the wine from magnum twice and both times it showed better than this. Not a disaster but a little outclassed by it’s partner.  The Barolo Santo Stefano 2004 is a wine I have never had before, exciting, it is a lovely dense but elegant wine, it wasn’t showing masses but what it showed had focus and class, quite floral notes, very persistent. If you own it you have done well!
The next pair was a lovely contrast Barolo Pajana 1998 from D.Clerico and Barolo 1999 fromBartolo Mascarello. The former is a high toned very oaked wine, not a bad wine but just, to my mind , not a Nebbiolo and not a Barolo. The clean dense fruit is to be admired and when judged purely as a wine it is impressive. At 16 years of age though the oak is still quite separate from the wine and will become more so with air. What would it have been like with half the oak? We’ll never know but it’d be interesting were it possible to know. The Bartolo was the opposite “old school”, starting to mature with a little bacon and savoury edge joining the gentle bruised red fruit, it was quite easy and approachable for a 1999, nice wine.
The final pair was quite something Barolo Monprivato 2005 from G.Mascarello and  Barolo Monfortino 2004 from G.Conterno. The Monprivato was like a cross over between Barolo and Volnay, really lovely lifted elegant red fruits, very focused and streamlined. If you have this wine it is definitely worth having a bottle soon as it is a delightful. The Monfortino was decanted from 2.30pm-5.30pm then put back in the bottle. On opening it had been hard as nails, tight. It then opened up more and more without ever revealing the full array that will come with time and was there from barrel. One of less than a handful of the only wines I have ever given 20/20. It is a great wine and that’s that. The texture being wonderful now, if I owned some (sadly I don’t) then I’d look again in 6 or 7 years.
One wine remained and it was a little gem that just bought everything back into focus – Graacher Himmelreich Auslese 1999, W.Schafer (8.5%) – a little spritz and still primary Riesling. I am a bit of a “cheap date” on Germans generally as I love Kabinetts but this was an example of a spot on Auslese.
There was a lot of good chat and many laughs…what’s the theme next time chaps?