So a gathering of what – for reasons of confidentially – I seem now to refer to as “The Lads”. The Greenhouse was the venue and sadly we were five not seven but with Nobby shuffling the deck winewise we had a hell of a line-up. 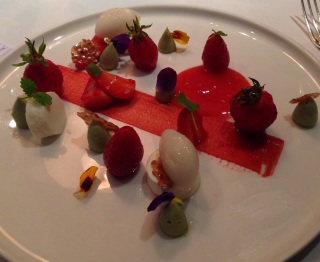 So now it was time for the line up to go up a notch. We did the three whites one by one and blind, only blind for a few moments that is.

Meursault 1er Cru Les Boucheres 2011, Chateau Genot-Boulanger is a wine I do not know at all. I’ll be totally honest and say I had an inkling towards white Bordeaux so fresh was this. That was never going to be likely but “nothing ventured” and all that. The freshness was from a nettley “good greenness”. This looks to have a good future and when it was revealed as Meursault it made me think of the tight, mineral styles like Roulot, nice wine.

Chevalier-Montrachet Grand Cru 2011, Francois Carillon was the bottle I took, only the second time it has been made. Francois Carillon as an estate being first made (fully) in 2010. This is from a tiny 0.045 hectares. It was good to have it after another 2011, it opened up more and more with time as you’d expect. There is a slight lemon sherbet element but also some of the saline quality, clearly it is a “nipper” now but has a good future and it was fun to keep re-visiting it. Pretty classy.

Batard-Montrachet Grand Cru 1986, Ramonet was so obviously much more mature, it was in now way tired, it was unctuously classy and moreish, there were elements of toffee and butterscotch but always with a drive and liveliness, really lovely, propper breadth too, it wasn’t afraid to be Batard, full and quite masculine, the empty glass smelt like a sweet wine. Splendid.

The three Burgundian reds were served in turn so that we could look at each but also look at them together:

Mazis-Chambertin Grand Cru 1993, Rousseau was absolutely delicious straight “off the bat” with red black fruits and a soft persistence, a lovely freshness went through the wine that kept it lively and airy, rose petals showed and a delightful balance. Very good indeed, very 1993 and very Pinot.

Chambertin Grand Cru 2001, Rousseau was every bit as good as I have dared hope. My note reads: Orangey tang and delicious, delicious brooding rich red and black fruit, a “puppy”, very primary with a stunning palate but delicious now, does have a savoury edge, cheese and smokiness, love this…

It was a truly glorious trio, just what those two producers and Burgundy are, and should always be, about – complexity and drinkability. We then had two pairs of Bordeaux. It was one of those splendid occasions when nobody was bothered about a “winner”, a real treat all round.
Magdelaine 1990 and Margaux 1985 formed the first flight. For the Magdelaine I had “Ink-like colour, showing well, bold, iron-like, savoury but with enough sweetness, rich, beefy, stocky, then dates, lovely” it is certainly on the savoury side as Magdelaine always is. A magnum of the Magdelaine 1985  was a real treat recently and much as I understand the reasons why it no longer exists in its own right (it nows forms a large part of Belair-Monange), I do feel it is a shame. We were a long way off with guesses, being on the other bank of the river but I am never unhappy to get this wrong (with a few exceptions). The Margaux was splendid also, a little drier and more reserved initially it somehow it had a bolder core and then became more lifted and aromatic, really lovely.

With “lunchers” energy not even starting to dip we were into the last pair of reds Cheval Blanc 1981 and Cheval Blanc 1959. I have to say I count my lucky stars every time I get to drink these older wines, the 1959 I really mean by that, when knowing they are from good cellars and are genuine. The way things are these days we would (at work) sadly run a mile from the wines from 1945, 1947, 1955, 1959 and 1961. But first the 1981. This was “forest floor” in character but then really quite rich, it was a quite degraded but sweet “naughty” smell, fresh with good lift, a confusingly good Cheval, (fortunately) I can’t remember what I though it was. And so to the Cheval Blanc 1959, I always find these very good but fully mature wines difficult to describe but then that is the very nature of complexity. My jottings say “sweet, savoury, leathery, tobacco and soy, more soy, more sweetness, dates, amazing savoury texture, more ferrous than frivolous”. It really was quite something, I think I guessed 1955 because the few of those I have had have the same energy and colour.
The final wine of lunch was de Fargues 1986, it was the only wine of the day that may be didn’t quite show its full potential, it was still good and not faulty but it lacked energy, there were bruised dried apricots, lots of rancho richness and lots of the brûlée character.

What a lunch it was, wonderful wine, lots of great chat and the chance to look at some try great wines and wines that might go to even more special places…thanks as ever to “The Lads”.

nb My only regret is that there is no picture of any labels or a line-up shot, for this I blame Ronaldinho fully, he distracted me…how is another story…