Now the last thing I am going to do is launch into a monolog on the merits of Clos St.Jacques. This area has been covered really well by a number of writers who have walked the vineyards and got under the skin of this site. What seems to be accepted is that, along with Les Amoureuses in Chambolle, here is a vineyard that is Grand Cru in all but name.

This tasting was held at 67 Pall Mall and hosted by Jasper Morris MW alongside Jordi. The focus was the vineyard rather than producer comparisons so, with one exception that came about by a reserve being used, there was no same producer and vintage side by side. There were some lovely anecdotes and Jasper added very well to the tasting with insights and tales.

The “producers” roll call is a tricky one as barrels have been sold and deals done in the past. Now there are 5 owners who, significantly, all own a strip the length of the vineyard, this is so important as there are three soil types from “top” to “bottom”:

The notes I have made on the wines are, as ever, written in a way I can relate to, I hope they may be of some interest. It is also nice to be writing a post where I have no agenda whatsoever. I always try to be honest but so often I have a bias, however hard I try not to. Wine is a people business and to think that knowing, or even wanting to sell, a particular persons wine does not have an effect is naive on my part.

None of the wines were double decanted, all just checked and poured. I think this is 100% the correct approach but it does mean that you find people’s opinions of a wine (top, middle, bottom of the bottle) does vary:

1970 Clair Dau – A quite thick, cloudy, degraded colour. Soy and mushrooms, this has a slightly yeasty character. There is a shade of bacon about this and not bacon fat. Rustic and a little gloopy. Not much sweetness but nothing harsh. I feel this note comes across too negatively, it was a decent wine just fully mature.

1976 Clair Dau (magnum) – Developed colour but not too much so. Spicey, meaty, a little leathery, sweetness too, this is intense. It is a wine fully on the tertiary characteristics. Meaty and animal like. I liked it.

1976 Clair Dau (bottle) – This was fresher than the magnum, unusually, bricky and good with a long finish. Nice.

1978 Drouhin – Clean clear brown colour but finely precise. Poised and lifted on the nose, at its peak I imagine. Almost a note of coconut water which slightly reflected a feeling of a little overoaking. The aromas then became prettier and more poised, tea and pure evolved pinot notes. Good wine.

1979 Rousseau – A saline edge to this, a tiny bit of tangerine, mature, has a moreishly gritty (only a little) texture. Good right now. There is that Rousseau minerality.

1980 Clair Dau – Tea aromas, bricky, quite scrawny, has a dryness. On the palate this is, weirdly, much more masculine, rich and animal. Another wine that shows 1980 to be so much better than people might think.

1986 Rousseau – A vintage where Jasper Morris noted it rained at picking time, and therefore some wines (the first picked) are rather better than others. Delicious in so many ways. Gentle, persistent and very fine. Red fruit shows well, the nose is stellar the palate also good but as can often happen it is not quite what the nose suggests.

1993 Fourrier – This has a markedly younger feel, more red/black fruit. Quite exotic in a a way, extrovert, in middle age if that, impressive.

1993 Esmonin – Easy to enjoy, not too grippy, lusher than many with almost a liquorice edge.

1994 Rousseau (magnum) – The vintage here is one that was nearly very good, growers being excited and then? It pissed down. This is super; saline, red fruits and balance, moreish and driven, superb nose, may be the weather shows in the mid palate, you could be very picky and say it is a little hollow but frankly I’d drink this whenever I could.

1998 Fourrier (magnum) – The quality of the grapes in 1998 was very mixed and required much sorting. Tea and oranges, this is light in texture and slightly divided the room, I was a real fan, it’s a “drinkers” wine for sure. Very delicate but all the better for that.

2000 Jadot (magnum) – The inverted snob in me really wanted to like this. A very warm vintage. This is richer and cruder, a little heavier but somehow lacks class sadly, not bad but not clearly deserving of its place in this line up.

2002 Esmonin – A very sweet, slightly oaked and toffee’d nose here. Serious fruit as well though on both the nose and the palate, I find it a little covered in oak but many others didn’t. If it integrates it could be quite something.

2007 Esmonin (magnum) – For me this was more driven than the 2002, it still had a marked cloak of oak but I would rather drink the 2007 now. There are elements of the easy enjoyment that this unsung vintage gives. This is a darker fruit character than I associate with 2007 but not the worse for it necessarily.

2008 Rousseau (magnum) – Just lovely. I almost feel I could leave it there. The 2008’s I think will be a very pleasant surprise for many, it is a more classical vintage to my mind, very pinot, not lush, more focussed. There can be a grip too which I like (the Nebbiolo man in me may be?). Anyway back to this wine, its just very good, red fruit, grip the early hint of saline, very Rousseau. The room was, I sensed, half hoping that possibly Rousseau wouldn’t dominate. Dominate may be too far to go but, as producer, it did show pure class.

That was the tasting done. I have one more note to add from a bottle that a customer and friend very kindly served a colleague and I last week. This was:

2000 Fourrier – Lovely bold but mellowed colour, pungent nose of all the right things, red fruit with a little mellow black fruit underneath, a tiny dash of spice…a complex wine in a lovely place, drinking well now but, to my mind, no rush at all. A lovely bottle to just drink, not showing the warmth of 2000, but may be a little of the richness that the season added. 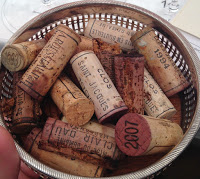 So after all that tasting what are my thoughts on Clos St Jacques? Well I would argue the quality is definitely very worthy of Grand Cru. It is also true to Gevrey-Chambertin but without trying to be a look-a-like of the masculine “creature” that is Chambertin. Sure it isn’t an easy wine to buy these days but to drink? All I would say is “yes please”…