I was due to have dinner with Jordi and a great offer came in for us to join Olivier, Sebastien and Bertrand – this just meant more wines and was an excellent chance to have my first Grouse of the season at the lovely Elsytan Street. A little while ago we did a slightly similar thing at Medlar. This was a cracking night.

We started with Prologue from Champagne J.M.Labruyere you can read a little more about Champagne Labruyere from the launch. This Champagne is still young but drinking beautifully now and just the thing to clean heads and palates and get the appetite going ahead of an array of treats.

The food through the evening was terrific (picture at end of this post) and in proper “hungry” portions which is a good thing when you’re as greedy as me!

So, to the pair of whites that kicked us off, a pair of 2006s. As I have said a few times I am not a fan of the 2006 whites really, they can be too heavy, a shade too crude and most, to my mind, should have been drunk by now to get the best of them. Apologies for the rare outbreak of negativity.

Batard-Montrachet Grand Cru 2006 from Domaine Ramonet –  This was, in contrast to my comments above, delicious, a little bit of reduction, some of that trademark stem ginger and a little citrus. There is an oily-ness but there is good drive. I think the peak might be now but this is in no way declining, it is delightful and belies the quality of the vintage without being a traitor to the vintages richness.

Bienvenues-Batard-Montrachet Grand Cru 2006 from Domaine Sauzet – This was a more conventional 2006 with a more dense richness but not the focus of the Ramonet. It is good, it has a Grand Cru decadence but lacks the precision of other vintages. I think this was the last bottle of it and I can’t see upside in keeping it. A good bottle that possibly suffered more by comparison to the Ramonet that through any fault of its own. 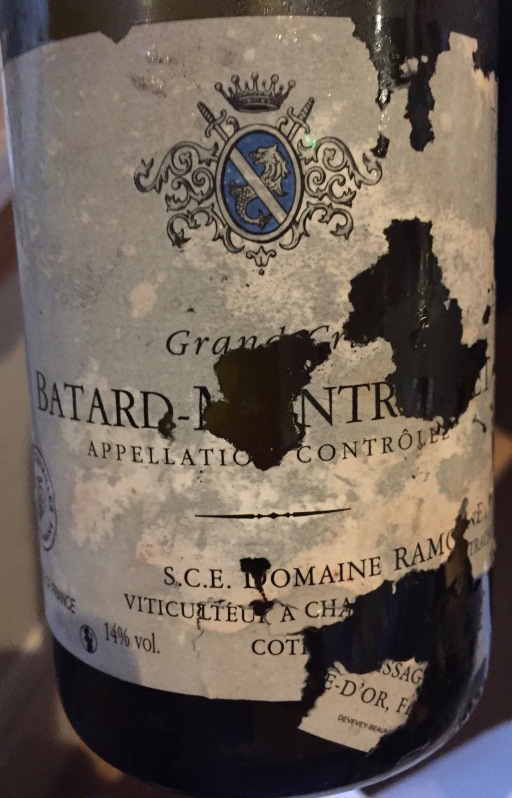 Red time and onto Jordi’s bottles first, no surprise when it was revealed they were mature Burgundies. I don’t think I have ever been to a dinner with Jordi where he hasn’t bought at least one bottle that is older than me (I am a 1975er).

Vosne-Romanee 1er Cru Les Beaumonts 1979, Alexis Lichine & Co (Jayer barrel) It is in this sort of company that my pretty decent knowledge of Burgundy starts to feel somewhat deficient. Alexis Lichine being a name I associate more with Bordeaux shipping and bottling than Burgundy. When someone asked “is it a Jayer Barrel?” I was a shade confused (though desperately trying not to show it!). It turns out that, back in the day, Jayer couldn’t sell all his wine easily (now there’s a thought) and so some barrels were sold to Lichine. The only difference, other than that you can naturally get between one barrel and another, being that the Lichine barrels were filtered before bottling. All of which is a side detail if it is not nice to drink. No great surprise then that it was rather delicious, slightly tea coloured with a lovely decaying sweetness and very gentle spices.

To be paired with the “Beaumonts” was another wine with an interesting backstory – Chambertin Clos de Beze Grand Cru 1969 from Domaine Clair-Dau. I have been lucky, via Jordi, to try a few other Clair-Dau’s during this luncheon and this tasting. The name is essentially the same holdings as what is now Bruno Clair. This Chambertin, or “Beze” to its friends, was delicious, vibrant and driven with good fruit. I am conscious that finding older wines to be young, and impressive as a result, has its contradictions – why not just drink younger wines? – but this was different. There was the soy and savoury side that you want from maturity and that counters the fruitedness. There was energy about this wine, I should think it has been delicious since it was bottled (and certainly before even that!). What a cracking pairing. 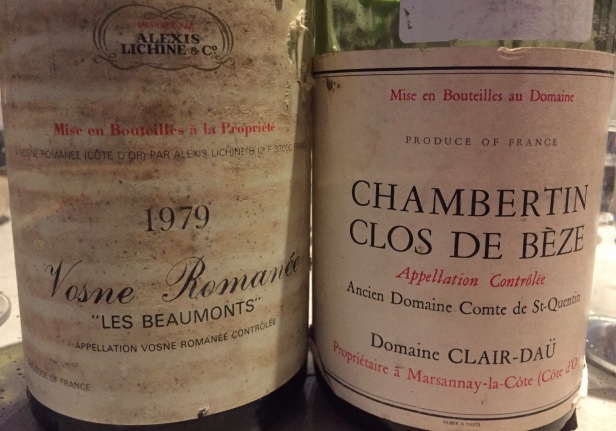 Now a pair of Bordeaux wines – Cheval Blanc 1985 & Haut-Brion 1988 – before the 1988 theme brought in two Rhones and Hermitages to be precise – Hermitage La Chapelle 1988 from Jaboulet and Hermitage 1988 from Chave. The Cheval Blanc 1985 had such a gloriously feminine Bordeaux nose; expressive, suave, almost vivacious, the texture was svelte, silky and so drinkable. It was a real crowd pleaser. The Haut-Brion was, by contrast, more intense, weightier, more brooding, more closed and dare I say, more masculine. The Cabernet Sauvignon more to the fore and the savoury, sometimes dry, character of the vintage showing through just a shade. This was a fascinating pair, mostly because of the contrast, as time went on the Cheval nose stayed expressive as the palate mellowed, the Haut Brion nose opened a bit but the palate went from strength to strength, a really delicious pairing and one that would win over almost any Bordeaux doubter. With the Rhones I found the La Chapelle to be a real “nose wine” soft and quite sexy, heart-on-sleeve stuff with masses to give and a soft subtle, if lightly too mellow, palate, lovely. The Chave was a wine of real energy and balanced intensity. Very proper, serious without being intimidating. A little of that wet meat character I love. The Chapelle is at its peak the Chave has time on his side.

We now had some cheese arriving and with it – Hermitage Blanc 2004 also from Chave. Now, of course, White Hermitage came before red – I say of course but I only found this out recently. There is a unctuousness to this that makes it an “in between” wine for me, not quiet a red or a white. Almost heavy but not quite, it does work well with the richness of the cheese. It has depth and is a wine of texture as much as anything. There is a little honey and beeswax.

Still time for two more bottles, I had taken Roc de Cambes 1995 as none of these chaps had made the Roc de Cambes 1995-2015 tasting. It showed well, it is a gentle wine and maybe a tad out-classed here (the Roc vintages from 2001 I don’t think can be easily outclassed by anything) but was very mellow and good. Bertrand decided a last minute pop ‘n’ pour was needed for Cote Rotie La Turque 1990 from Guigal – this is a rich and full wine, uber fruited and still very much a teenager. Massive depth and quite a bit of savoury muscle. At this stage a decant after breakfast to drink with dinner might be the way to go but we good a great glimpse at the beast in the bottle.

What a fabulous evening of wines and company not to mention the very good food! Thank you chaps! 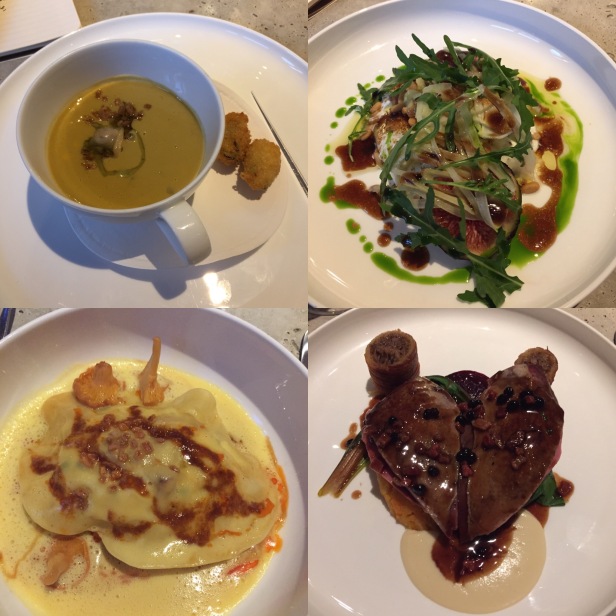