Yesterday’s lunch at 67 Pall Mall had been in the diary for a little while and was always intended as a day ending luncheon. Mr Magnum, RMW and myself each produced a couple of bottles. Blind to a varied degree.

We started with Taittinger 1992 “Art Series” a wine I have heard of once but never experienced. A little more information can be found here – Taittinger Collection. The series was conceived in the late 1970s by Claude Taittinger. A long time lover of the arts. In 1983, Champagne Taittinger introduced the first rendition, a special bottle with a laser-sealed sheath that visually expresses the artist’s concept of the magic of Champagne. The artist in 1992 is Matta. The Taittinger Collection wines are released only in great vintages, from a selection of the year’s finest cuvées. The wines are made from Chardonnay mainly from the Grands Crus of the Côte des Blancs, and Pinot Noir from Montagne de Reims and Vallée de la Marne. So it does not clash with the

Comtes de Champagne Blanc de Blancs from the very same house. This was rich and incredibly vinous, a good, mellow but persistent mouse there was a toastiness as well as a savoury yeasty element with green apple acidity to stop it being too weighty. RMW set the tone with the phrase “if gold had a flavour then this is it”! What a unique start…
Time now for some white wine having ordered our food. Once we new what this was – Meursault Santenots 1er Cru 2000 from d’Angerville we reckoned that we were probably the only people anywhere having this combination of wines this year and we were only two bottles in…Served blind (although embarrassingly we had been told a few days earlier what it was but had lost the ability to recall it). There was a good stink of reduction at the start that made me think of serious Burgundy then as this passed and a richness of fruit came through I was was in the Rhone with rich aromatics. It then changed again and became far more mineral and stoney, like very good Chablis, clearly little or no new oak at all, delicious. The only other time I have had this as a mature wine was the 1990 during this dinner – Clos des Ducs 1920-2002. A real treat.

Next – Vosne-Romanee 1er Cru Cuvee Duvault-Blochet 1999 from Domaine de la Romanee-Conti – served blind and it was a star from the moment it hit the glass and continued over 2 hours or more to excite and amaze. It is so glorious when a bottle sings it’s very best tune – this was just in the moment. The DRC 1999’s (and I am hideously biased) are supreme. This was so poised and fine but at the same time decadent with layer upon layer of fruit and delicate persistence revealing itself. A marvel and a very generous one. It is always special to have  bottle of this wine and this was the first “modern” vintage of it. 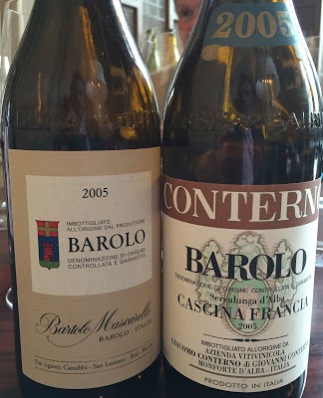 Now time for my pair – Barolo 2005, Bartolo Mascarello and Barolo Cascina Francia 2005, Giacomo Conterno – I have had these together a few times. I love how they both outperform the slightly tricky vintage and show two different sides of the traditional School. Conterno is about “single site” and Bartolo about blending sites. Neither is right or wrong. Again I have bias. The Bartolo is a rich more velvet textured and darkly fruited example, the Cascina a shade more driven and focussed, more savoury, less extrovert with that telltale salinity to the fore…they were fascinating to follow.

Then for what was supposed to be our last bottle, Poggio di Sotto Il Decennale 2001, essentially this is a Brunello Riserva that could not be name as such as it, in theory, did not have enough colour back at release time to be deemed a Riserva…what a load of nonsense. This must have gained colour, as if that was ever a good justification. A lovely, still rich but ready, wine with poise and a delicate bruised dark fruit aroma…lovely. Having had the Brunello normale in St.Emilion as well this is such an estate to watch (not that this is news).

It was Friday and not even 4pm yet so Mr Magnum decided, as he does, that another bottle was crucial. Not just any other bottle either, served nice and cool and growing in stature and depth the Musigny Vielles Vignes 2001 from de Vogue was quite something. The old adage of “the iron fist in a velvet glove” is a good one with this vintage now. There is a core of rich almost ferrous fruit and depth but with enough flesh to make this obviously a very fine bottle now. Delicious.

The UK may not be quite were we want it at the moment but with a lunch like this the world seems a better place…bravo chaps and thank you!

2 thoughts on “The only people anywhere….”