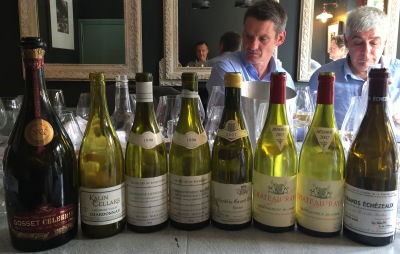 So, first things first, this was a master class in belligerent organisation. Getting this motley, yet ever so lovely, crew together is never easy. Peat did a great job. The plan, which largely came to fruition, was meet in Henley at the Riverside then lunch at The White Oak at Cookham before a trip up the river then supper and home or bed! In some ways a little like the Rousseau at Riverside post from last year.

The cast:
– Irish Peat – the host, organiser and all round good egg.
– Halifax – excitable northerner with great cellar, even if he didn’t know the vintage of the wine he produced.
– Ronaldinho – another northerner, epic cellar, usually found telling inappropriate jokes or smoking cigars.
– Chewy – wine merchant, top chap, not wearing the bow ties of old but still laughing very loudly.
– Woo – wine merchant, mellowing yet opinionated chap, love him.
– Tides – (the newest nickname) – young father, lacking sleep passionate anecdote teller and very good at telling taxi drivers to “put their foot down” whilst snoring at the same time.
– Myself (Young Will) – scribe, drinker and slightly (unless you ask my wife) OCD travel coordinator.

So with a quick half of beer negotiated it was time to get cracking, first up was Gosset Celebris 1990 from magnum which had been released for the millennium rather than being the 2000 vintage which it’s kind provider thought it was. This was lemon like with a biscuity side but nicely mellow, just perfect now to my taste. A good bit of saline zip. It drank well as an aperitif and when we returned to it later. Latterly a bit of apricot and more roundness came out…a splendid start.

A lone white was poured next. Most of the wines at lunch were blind for a bit while we had a chat about them. This turned out to be Livermore Valley Chardonnay 1995 from Kalin Cellars. Just released and just shipped, very much a new producer to me. It was smashing, ginger and richness on the nose with a mellow palate, some good oxidation and botrytis. This all sounds a bit much but it wasn’t at all heavy, generously open and bang on right now.

The next wines were a pair – Chassagne-Montrachet 1er Cru Les Champgains 1990  and Chassagne-Montrachet 1er Cru Les Chenevottes 1990 both from Domaine M.Niellon but only the second one was served blind. Amazingly these were the first bottles from a case of each. The Champgains was initially quite reduced and very “rural” but with air it became brilliantly focussed and pure showing nothing like 26 years of age. Saline and slate-like, to me this could have been Grand Cru Chablis. Then to the Chenevottes which was blind, Tides got his nickname here as he compared the wine with being at different stages of the tide…(yes I know!!)…The Chenevottes was more mature, bready and a little more toasty, waxy even. The palate more generous but not as fresh, responses were mixed, I liked it. Always fascinating to see two wines separated only by site.

Chablis Grand Cru Valmur 2007, Domaine F.Raveneau was the bottle “Tides” now presented as he tried to regain any glimmer of respectability. In fairness this is some wine. I love Raveneau and have drunk my share BUT this is the first Grand Cru I have had. Halifax described it as “hermetically sealed”. It did demand time as it was coiled tight. As the wine lost its chill over the next hour it revealed startling poise and drive, verve, electricity. Very fine. If you’re lucky enough to own it just leave it for another 4+ years. 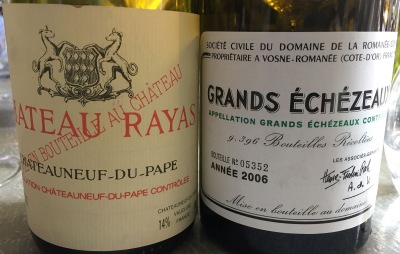 So to red wine! Served blind side by side we had: Chateauneuf-du-Pape Reserve 2007 from Chateau Rayas (twice) and Grands Echezeaux Grand Cru 2006 from Domaine de Romanee Conti. As if the line up of producers was not incredible enough already. We actually had two bottles of the Rayas. Bottle one, which just got my vote (if that were necessary) had a beautiful lavender and fennel unctuously superb decadent nature, raspberry and sweetness, ripeness too. An intense and delicious wine, young yes but infanticide? No. The second bottle, most of the gangs minor preference, was more powerful, more succulent and a little more classically Chateauneuf-du-Pape. Either way both were stunning. The Grands Echezeaux offered what Chewy termed “florality”. Soft and supple while obviously young this had a lovely warm vintage breadth with floral elements and spice. A long life ahead, as with the Rayas but no crime to drink it now and my notes say the last large mouthful was “delicious”…as lovely as it was generous of our host… 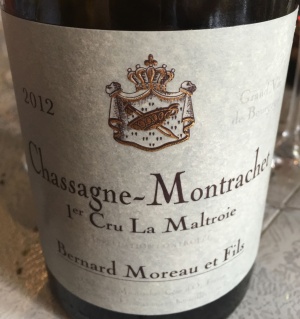 As a certain sense of “this is fun but let’s not overdo it” or “marathon not a sprint” sentiment crept in we had on more bottle. Chassagne-Montrachet 1er Cru La Maltroie 2012 from Domaine B.Moreau et Fils was a delight, young but very much balanced (not all 2012’s are in my view) and showing a sort of 2010 like purity, very balanced and very nice, good gentle use of oak.

The team at The White Oak had done a really good job – recommended!

Cabs were ordered and “Tides” started to wonder how he was going to leave before dinner as he had planned…back at the riverside we grabbed some reds and my blind fizz and got in amongst the regatta, almost literally.

The blind sparkler of which I write is Wiston Blanc de Blancs 2010 a wine I really like, their Rose is spectacular too and I don’t really “do” Rose (wine for the indecisive you see). This is mellow with apple fruits, a little toast and nicely refined.

The other “on-board quaffer” was a couple of bottles of Morey-St-Denis 1er Cru Les Chaffonts by Domaine H.Lignier. This is quite high octane, good saturated darker fruit and a savoury side, drinking now but made to last as well I feel, a touch of Iodine, there is a little structure that still needs to resolve but ultimately very good. It brought on a fit of piracy as we were beckoned to the shore by a group having a bit of fun in a marquee on the riverside.

Once we had made it ashore we were treated to a glass of Sparkling Saumur (no photo- apologies), although Chewy and Tides found some beer (possibly a wise move). As the party  looked in a minor state of implosion we got back on board the boat and headed for base camp.

Pre-dinner was, of course, Salon 2004. This is opening up more and more over the short time it has seen since release. There is a marked salty-ness to this vintage, Salon never lacks for precision but this was a superb glass (and Zalto universal works very well for this). It’ll be fascinating to see how it ages alongside the 1999 and 2002.

I am not sure I have had many 1979 whites, if any. Meursault-Chevalieres 1979 from Domaine Rene Monnier was a wonderful mature bottle, my little note book simply says “under-ripe toffee apples and apricot, just instantly delicious, opulent, late picked? Crisp on the palate, not OTT, lovely, zip is there”. This was the first of Woo’s two whites, what followed is Chassagne-Montrachet 1er Cru Caillerets 1986, Domaine Bachelet-Ramonet. This was not as opulent or overt but more restrained, more classical. Superb balance, fully mature but not even a shade over mature, the reduction left as the wine saw air, just lovely.

What had turned into something of a Chardonnay Master class saw no signed of abating as we now had Batard-Montrachet Grand Cru 1988 from Domaine Ramonet. This was Ronaldinho’s bottle to complement the pair of Niellon’s earlier. My notes get less readable from here, this had the signature stem ginger that Ramonet so often does, this same group actually had this wine a year or so ago at the Double Birthday Bonanza. It’s a joy of quality with the near perfect balance between the maturity and richness and the savoury freshness. 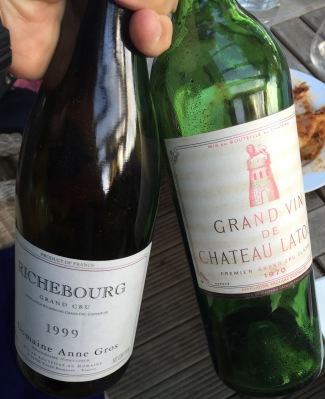 Richebourg Grand Cru 1999 from Domaine A.Gros and the only Bordeaux of the day – Chateau Latour 1970 – were next as we devoured a terrific Pie having put the fish broth to bed!

The richness of the Richebourg was the perfect foil to the iron like classicism of the Latour. The fruit profile on the Gros wines always seems that bit darker and richer, wines that age on their savoury edge. The Latour was just so Pauillac with richness but no sense of showiness. It was a very good phase for Latour from what I have had. Just a lovely pairing.

Now it is a rarity if Mr Rousseau doesn’t get a good airing with this host and we were in for a treat next with two bottles of Chambertin Clos de Beze Grand Cru 1993. As a vintage it is a joy to drink now, a little like the 1991’s and the sort of vintage that 2001 has a good chance of becoming, the profile is so fresh and just so “Pinot”. This Beze managed to be both fresh and red fruited but serious at the same time, a wine with a real lift and profoundly enjoyable even with so much wine in our bellies!


And that, as they say, was that, the northern contingent hit the sack and the Londoners jumped in a cab…these gatherings are what it is all about, great fun, great friends, great wines…memories…onwards…Booked that yacht yet Nobby?

Some of the Lunch dishes