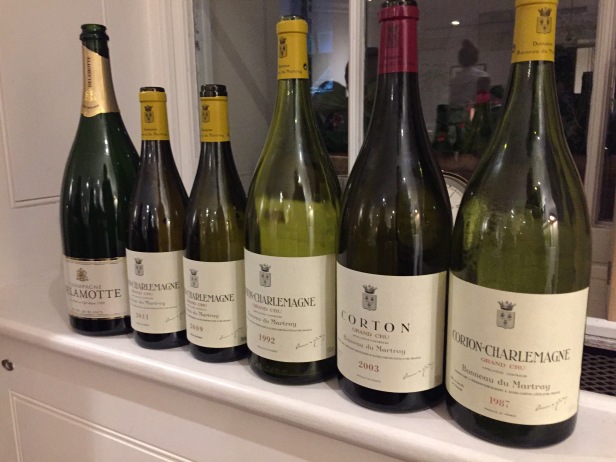 I have worked with the Bonneau du Martray wines since the 2000 vintage so all the usual bias warnings apply here. This was a rather different dinner because it was a chance to say “au revoir” (but certainly not a full good bye) to Jean-Charles Le Bault de la Morinière after the recent sale of the Domaine and, at the same time, welcome Armand de Maigret, the man in charge of the Wine estates of the new owner.

There are a lot of previous Bonneau du Martray blogs and I am not going to go into the history here. That is covered in a whole myriad of places including HERE. This was an intimate dinner at HQ to just enjoy the wines. As usual we started with Champagne Delamotte Blanc de Blancs NV from magnum, as delicious as ever! The menu for the evening was delicious and played a lovely, and very deliberate, second fiddle to the wines.

Fillet of Turbot with Celeriac

As we listened to Adam and then Jean-Charles’ amusing and heartfelt words we were served the Corton-Charlemagne 2011. I have made no bones about how much I like 2011 white Burgs for drinking now, they have an easiness but without being too generous or in anyway “loose”. This is, to my mind, the youngest of the Corton-Charlemagnes from Bonneau that is truly drinking now. We paired this with the Corton-Charlemagne 2009, both being from bottle, only magnums from here on in. The 2009, as I wrote about in the last post, is very very good 2009, a wine of real substance but still with a lightness of touch. As J-C put it the wine says “I am making you happy but I am serious!”.

As the main course arrived and following a few more charming anecdotes, we were onto a red-white pair – Corton 2003 En Magnum & Corton-Charlemagne 1992 Magnum. I love having red and white Burgundy alongside one another. Often they have more in common than they have differences. This Corton is, I think without searching too hard through my memory the best Corton I have had. Where there can sometimes be a little graphite and a little cool fruit ripeness this had richness but with focus. Blind I would have been in the very best of addresses. Mostly mulled red fruits and a whiff of orange rind, splendid. It was picked, in that extreme year, from the 23rd August onwards. The 1992 Corton-Charlemagne by contrast is a wine that has made its reputation already. This is mature white Burgundy at its best, rich but lithe, honey but dry honey, a little cheesecloth, that essential salinity and moreishness. A wine to savour and sip, often! The pair just played with each other, neither dominating just gently sparring back and forth.

From here we went off piste a little. The Corton-Charlemagne 1987 En Magnum was a “different” choice but the acid-test of a great domaine is the weaker vintages. Several years ago we were looking for an older vintage to offer, we had already done some obvious candidates so the team tasted some lesser vintages and the 1987 came up trumps. I have had it several times from bottle, this was the first from magnum. It varies a little – it’s a 30yr old white after all but the variation is on a theme and is fascinating. It is a very tricky wine to write about or describe as it has a fully mature profile but also acidity and life, there are reminders of rich hard cheeses with salt crystals.

The evening served to show that this Domaine is a great one, that the wines are better than ever and that Jean-Charles, as Armand paid tribute, has been a superb custodian.

One thought on “Bonneau du Martray – Thank you Jean-Charles…”