An email arrived to a group of us a few months back from “Sussex” to say “fancy a Monfortino and white Burgundy BYO evening at 67 Pall Mall?” Not a tricky invite to accept. We were eight in number in the end. There are few wines that excite me as much as Monfortino so this was a splendid prospect. It is also a wine I am lucky to know rather well (usual bias warning). I visit Roberto Conterno each year and actually still need to write up this years trip. The white Burgundy part ended up being almost exclusively Roulot which I know well-ish mostly from a Roulot evening at Medlar. 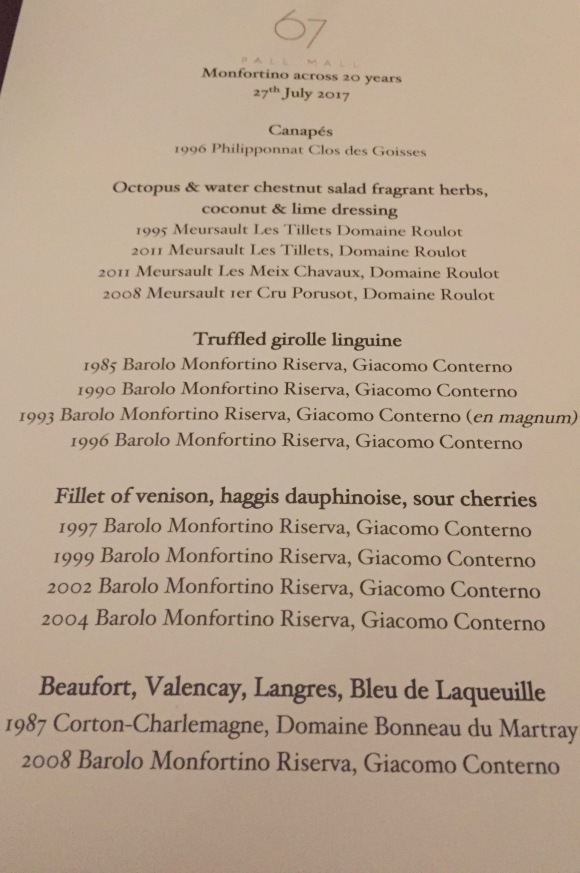 We started the evening with a magnum of Clos des Goisses 1996 from Philipponnat which had a  sweetly toasted nose but then that marked lime acidity you get with (most) 1996s. The finish is then quite savoury, this is good but maybe worth keeping a little longer if you want the full “Meursault-esque” rich Philipponnat style.

So then in one flight of 4 wines we had the below.

Meursault Les Tillets 1995, Roulot – Good colour, i.e. appropriate for 22yr old white Burgundy, some good (not bruised) apple fruit, there is a nice nose of cheesecloth-like tangy maturity, this got better with air and is a good wine, liked it.

Meursault Les Tillets 2011, Roulot – Immediately enjoyable as so many 2011 whites appear to be. Open and clean, has a nice toasty edge and decent acidity, just really good and whilst it will age well you’re missing out if you don’t have it as it is now.

Meursault Les Meix Chavaux 2011, Roulot – Much tighter and more closed than the Tillets 2011. More Chablisesque than Meursault as it started. It definitely did open out though but without losing its mineral, proper, lemon sherbet-like drive. Wait 2-3 years I think (or give a good decant).

Meursault 1er Cru Porusot 2008, Roulot – A little orange rind and toffee apple. This is evolved but not premoxed. It is a vintage, in whites (the reds have outperformed early hopes in my eyes), that I am less and less keen on. The fruit often seeming a little over done where the acidity remains piercing. It could well be a vintage to “cross everything and keep them” but I am not sure. These comments are not remotely “Roulot orientated”. I would love peoples views on 2008 white Burgs?

The flight was good as expected, 1995 well exceeding expectations and the 2011s showing the vineyard differences – one to start enjoying and one to keep a little.

So now it was Monfortino time! We went in two flights with the 2008 alongside cheese thereafter. The Monfortinos were all from bottle except the 1993 which was a magnum

Monfortino 1985 – Iron fillings and lovely sweetly degraded fruits, some tar and a little iron but all with a core of darkish fruit, very good bottle of what has tended to be a very good vintage. The saline edge, a real Cascina Francia vineyard characteristic, came through with air. Very lovely.

Monfortino 1990 – I commented when we moved to the 1990 that, in my opinion, no vintage in Europe (2010 may in time) leaves as common a “stamp” on the wines as the lush, decadent nature of the 1990 vintage. This is deeply fruited with a more savoury edge to the structure it is very very good but maybe (nit-picking) it doesn’t quite have the defined focus of some. I would drink 1990 from now and enjoy it as it is. Gourmand.

Monfortino 1993 Mag – Bricky (by which I mean a kind of bacon meets oranges note – sorry that’s not helpful but I know what I mean) with good acidity and zip, very proper and very much mature Nebbiolo. My scribblings say, “imperfect but nicely so” the magnum is a very true one. Balanced.

Monfortino 1996 – If 1990 has a general character of lushness then 1996, in most places, is best described as “strict”. This is very savoury, almost lean but in a good way. Dense soy character, good structure, a purists wine, better and better with air, focus more than density, definitely a keeper. Great work in progress. The bi-polar side to the 1990.

Monfortino 1997 – This was the only bottle that had any slight fault, I know the 1997 pretty well and it only showed a tiny shade of metalic-ness at the very end, the character is a degraded, looser, warmer fruited in generally. It tends to be the one young Monfortino that I think is totally ready. In another recent Paulee a magnum of it was the “wine to drink tonight”. Go for it!

Monfortino 1999 – This is a masculine wine, beef stock and pulled pork make an appearance, the fruit is behind and is both dark and richly fruited, this is a sleeper but a very balanced one, tightly coiled. Note finished “intense, full, rich – love this”!!

Monfortino 2001 – I have always found the similarities and differences between 1999 and 2001 very interesting. They are both what I would lazily refer to as “masculine” and yet they are quite different. The 2001 is perhaps the younger vintage best to show someone who wants to get an idea about Monfortino. This is deep and full with big, lovely tannins, fruit and leather and a quite resinous texture. It is, to my taste, 2-4 years off the perfect time to start drinking it. Splendid.

Monfortino 2002 – If the 2001 is a typical Monfortino then 2002 is the opposite – atypical. It is (currently – 2013 and 2014 will follow suit) the only time that there has been a Monfortino and no Barolo Cascina Francia. The decision was made by Roberto with his father. The character is a richer more fruited, maybe slightly simpler, wine at the moment. The vintage it seems most like to me is the 2000 but that’s still not a simple comparison. There is a seriousness to the dark fruit that reminds me slightly of the Nothern-Rhone – I am thinking Rostaing or the like. This compact and there is good tannin. Fascinating in a very good way.

Monfortino 2004 – One of the first wines I ever thought to be perfect. By this I mean not just very good, I mean a wine that I would not change anything about. There are probably 6 or 7 others where I think this. The character is so incredibly hard to describe, it is neither  male or female but it is somehow both. The red fruited-ness sets it apart from 1999 or 2001 (or 2006 for that matter) it is serious but effortlessly flirtatious. Very very fine tannins, a little pepper, good structure – both very fine tannin and graceful acidity. Long, long, long. The drinking window for this is insane – poised and graceful now with splendid ageing potential. Whatever your sporting “thing” is this is it, Federer on grass, Seve at the open, Blanco on the counter…

It had been a splendid array already but we had two wines to go:

Monfortino 2008 – There was a weird period in Piedmont in September 2008 when the weather dipped to nearly zero for a few days and Roberto has always commented that this has left a, hard to define, character on the wine/s. This is the Monfortino I have tasted the most in barrel and bottle and I have always loved the elegant brown flavours, sweet leather, cinnamon and a little truffle, the structure is great too, it is maybe the feminine partner of the uncompromisingly savoury 2006. I think this will have a long drinking window as there is a definite sweetness but also a gracefulness to match the tannin and acidity. Lovely.

Corton -Charlemagne Grand Cru 1987 En Magnum from Domaine Bonneau du Martray – And so to the final wine, one I know well and one with a bit of a back story. From when we, C&B, started representing Bonneau du Martray (with the 2000 vintage in late 2001) we also did an older vintage offer each year. We had offered, in the first few years, some more obvious (and obviously delicious) vintages – 1990, 1992, 1993 etc but then rather than jump forward we thought lets do the acid test of a great estate – a lesser (arguably horrid) vintage. We tried, and liked, the 1987. So we offered it and it went well but certainly not to the “vintage snobs” (silly phrase but…). When we recently gave a dinner to thank Jean-Charles for all he had done at Bonneau du Martray (read the link for more info) we just had to show it again. This was from magnum and is delicious, perfect with the cheese. Steely and yet with cocoa and mocha aromas that I associate with late disgorged Champagne, dry nougat and lanolin. With a wine like this I always try to think about what I would try to deduced it was if served blind and I think I would go with fully mature Chablis from a top grower. A lovely ending! 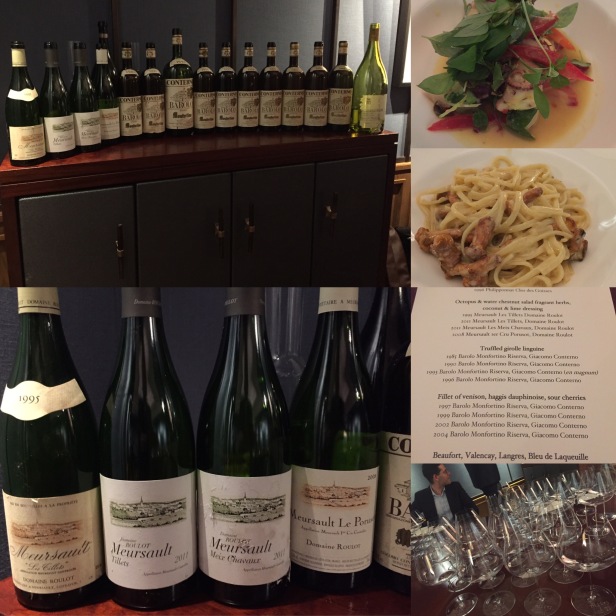 Conclusion: Many thanks to Sussex for organising and to everyone for their contributions, it was a lovely relaxed evening. Increasingly I feel that for these types of line-ups the 6-8 number is perfect. It being possible to chat as a whole but also have two or three conversations on the go. Politics in general and Brexit in particular got their usual passionate airings! Monfortino is one of wines greats!

A pair of food pics.