This was the “hat-trick” landed in following on from the 1996 & 1997 renditions. The format is a fun one and we have Mike to thank for the organising. We started it as a group of people in the trade who, loosely, very loosely in some cases, started in the trade at the same time. The first vintage most of us got involved with was 1996. Medlar has always been the venue and they did another great job on this evening and Didier’s wine service was exemplary.

All the wines as served blind but clearly the vintage is known! So, as everyone gathered we started with a bottle of Dom Perignon P2 1998 which was deliciously rich but had good life. I have had this twice recently and both examples have been spot on.

The first pair of whites then arrived – Clos Saint Hune 1998 from Trimbach and Riesling Smaragd 1998, Weissenkircher Klaus from Weingut Prager. The former was very tangy, with orange rind, very viscous but not heavy, may be not quite having the energy that one might want from such a great wine. The Smaragd was very good and outperformed expectations. It has richness and life to balance.

Next a pair of white Burgs – Meursault Tessons 1998 from Roulot and Corton-Charlemagne Grand Cru 1998 from Bonneau du Matray. Now 1998 was never a great Burgundy vintage for either colour. The examples we had on this evening were in good form, especially considering this. The Tessons had a tiny bit of reduction on the nose, a little dryness but freshness too, fully mature with a nutty side. The Bonneau du Martray had good length on the palate after a nose that was very focused and may be a little lean. A little brine too.

It was now time for red but we were staying in Burgundy:

Volnay 1er Cru Clos des Ducs 1998 from d’Angerville kicked us off, ash and slightly degraded fruit on the nose, the body was still there but fully mature to my taste.

Vosne-Romanee 1er Cru Brulees 1998 from Engel was next and was, for many, the wine of the night, superb crushed rose petals on the nose, some sexy degraded fruits, then a little dash of black cherry, a soft structure that matched the fruit, just delicious and far more seductive than I think we thought any red Burg ’98 would be!

Clos Vougeot Grand Cru 1988 from Domaine Anne Gros – This was embryonic, poised, focused and very linear, a good example of Pinot Noir though it belied the “chunky” style of Clos Vougeot. Refined and very impressive. 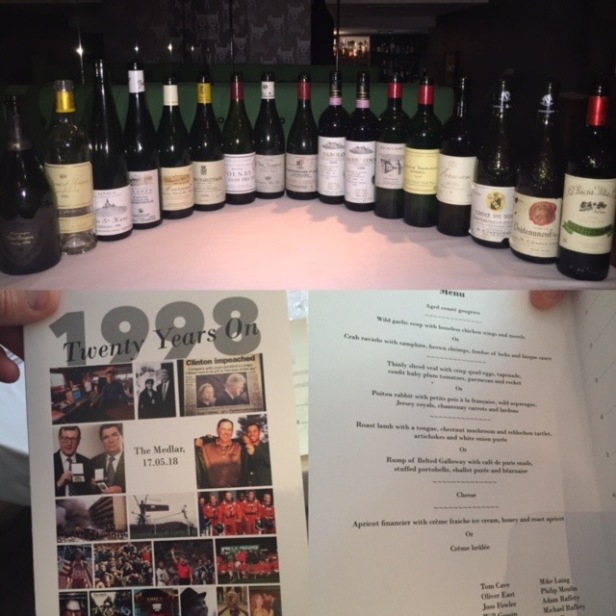 Now Italy, as quite a few of the assembled are Italophiles…

There was always going to be a couple of right bank (or at least Merlot heavy) Bordeaux in the line up and so it proved next. Roc de Cambes 1998 was first, I loved this and guessed it was La Mission Haut-Brion! Quite an upgraded for the mighty “Roc”. It was a spot on bottle, perfect now. The other bottle was Trotanoy 1998 which I was pleased to get but then I should have got it as I know this chap very well, it has always been cracking, great balance and good fruit balancing a savoury and quite masculine element.

We still had 4 more reds to go! Rick Forman 1998 from Napa was a super bottle, I know absolutely nothing about it but just found it thoroughly enjoyable! Chateauneuf-du-Pape was, a little like right bank Bordeaux, always going to feature. We had two different examples from M.Chapoutier – Barbe Rac and Croix de Bois, I found the later to be more resinous and “thicker” the Barbe Rac was redder and sweeter in fruit profile, more lifted and just pipped it for me. The last red was Rioja Alta 904 Gran Reserva 1998 and was youthful for 20 years, a distinct note of coconut with deep, ferrous bloody fruit underneath.

Then one last bottle and what a bottle – Yquem 1998 – it might not be a legendary vintage for Sauternes but this is a very good, full-on, no holds barred wine that shows Yquem to be what it is…the best.

A splendid evening, thanks to all for their bottles and to Mike for energising the whole thing! Looking forward to 1999 – Burgs, Rhones, Piedmont and Champagnes…