Once a year, or so, a gaggle of us who all went to Sherborne (boys or girls) and ended up in the wine trade get together for a lunch. Chez Bruce last time was a lot of fun!

I am incredibly late writing this up (it happened back in December 2017!) but I didn’t want to not do it. We had chosen Andrew Edmunds as one of the team new them well. I’d never been but it was a lot of fun and we were very well looked after. I can’t remember exactly who brought what so I will keep it anonymous.

We kicked off with a very delicious, serious, Pol Roger Cuvee Winston Churchill 1996 which tasted exactly as you would want it to. Lemon, toasty richness and real depth but not at the expense of freshness, spot on. It was followed, a tough gig, by Kits Coty Coeur de Cuvee 2013 which was great, nicely mellow with a delicious nose and a lot of style. From the same stable the first still white was Kits Coty 2014 Chardonnay which I was pleased to get “correctly” wrong as being Chablis from a ripe year on unoaked Aussie Chard. I think is is comfortably the best dry still English white I have had, impressive, poised and fine.

The food started to roll in and was a real treat, crab, a great pie, etc. Wine-wise we were now off to Germany and Neiderhauser Hermannshokle Riesling Spatlese 2011 from Donnhoff which was entirely as good as you’d expect, ripe and full-ish but with great acidity and a real treat right now, as much as it will also age very well. Then back to Chardonnay with a magnum of Francois Carillon’s Puligny-Montrachet 1er Cru Les Combettes 2015 which showed very well, Combettes being one of the more opulent and forward 1er Crus and the fact that 2015 has a good ripeness, this will age but has the zip and richness to be good already.

Now reds – Gazin 2001 En Magnum kicked us off. Pomerol 2001s are hardly a secret but they are mighty good. This was exactly at a stage I like these wines to be at, some development but fundamentally still good fruit to get stuck into. The counterbalance to the Pomerol was a magnum of La Reine des Bois Lirac 2005 from Domaine de la Mordoree which has a little more guts and tannin but was in no way a brute! Another southern French magnum then came our way with Chateau des Estanilles 2014 Le Clos de Fou from Faugeres – I stupidly made no notes here but I do remember liking it. A bottle of Barolo La Serra 1997 from Roberto Voerzio was a little off peak form and tasted like it might have got a little warm. We finished the wine part of the evening (beers were had after) with a magnum of a unique (in that format) wine as I understand it – Chivite Vendemia Tardia 2006 – it tasted more like a mature Sauterne than anything else I have had. There was a good acidity to keep the richness going – delicious.

And there, apart from a vociferous singing of the school in Latin, we go…much fun, where to next year? 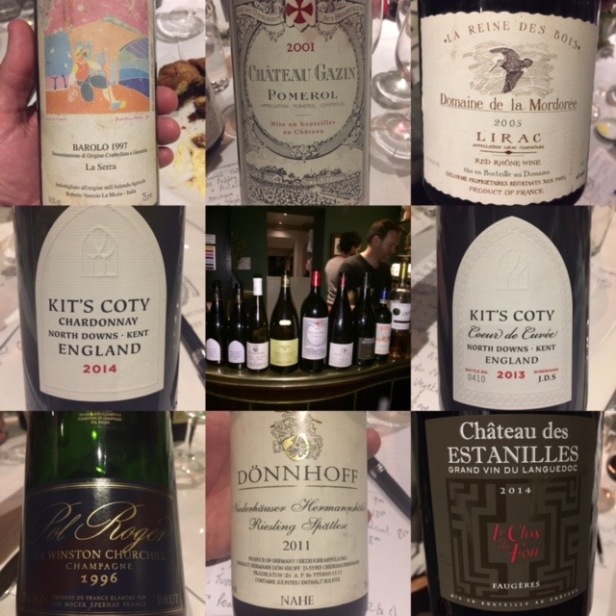